To evaluate the quality of the data on fatal workplace injuries in Brazil, in the Mortality Information System (SIM) and the Information System of Notifiable Diseases (SINAN-AT), analyzing the spatial and temporal distribution between 2007 and 2012.

We identified fields related to fatal workplace injuries, which were examined for completeness and the use of the “ignored” option. From the SIM, we extracted the records of deaths from external causes, which require the completing of the <acidtrab> field about their relation with work. From the SINAN, we analyzed the <evolution> field, which allows us to identify fatal cases among s severe workplace injuries.

The quality of the records on the fields of interest needed to identify fatal workplace injuries is poor in the SIM, but gradually improving. Recording quality was better for SINAN-AT, which has also been strongly getting better lately.

This research was carried out with all deaths from external cause records from the SIM and the work-related injuries from the SINAN-AT, among individuals aged 18 to 65 years, from 2007 to 2012. The SIM database was extracted from the Ministry of Health website, while SINAN-AT data were available at the Collaborating Center for the Surveillance of Workers’ Health, webpage of the Universidade Federal da Bahia. The SIM data analysis focused on work-relatedness, which corresponds to the <acidtrab> field or <evolution> from the SINAN-AT.

The variable injury work-relatedness has the following categories: 1 = yes; 2 = no; or 9 = ignored. In the SINAN-AT, correspondingly, the variable clinical evolution groups are: 1 = cure; 2 = temporary disability; 3 = partial permanent disability; 4 = total permanent disability; 5 = death from work-related injuries; 6 = death from other causes; 7 = other; and 9 = ignored. For both information systems, descriptive variables were calendar year, state or federal district, and region. Data incompleteness was assessed with boxes left unfilled or with ignored answers, analyzed together and separately. These variables were categorized based on quintiles: for the SIM, I (≤ 71.2%), II (71.3 to 77.2%), III (77.3 to 85.8%), IV (85.8 to 90.7%), and V (≥ 90.8%); and for the SINAN-AT, I (≤ 7.5%), II (7.6 to 13.1%), III (13.2 to 16.1%), IV (16.2 to 25.5%), and V (> 25.5%). In addition to absolute and relative frequencies, the percentage proportional variation (PPV) for the time period was calculated. Maps present the spatial distributions. Data were processed in the SAS application, version 9.4. The Project protocol was registered in the National System of Ethics in Research and approved by the Research Ethics Committee of the Instituto de Saúde Coletiva of the Universidade Federal da Bahia (Protocol 927,439, December 15, 2014).

Thumbnail
Table 2
Distribution of records with unfilled <acidtrab> in the Mortality Information System (SIM), by region and federated unit. Brazil, 2007-2012.
Thumbnail
Figure
Proportion of records with ignored or unfilled <acidtrab> in the SIM and <evolution> in the SINAN-AT by federated unit. Brazil, 2007-2012.

Thumbnail
Table 3
Filing status of the field <evolucao> in the Information System of Notifiable Diseases (SINAN-AT), by calendar year. Brazil, 2007-2012.

The proportion of missing records for evolution varied from 3.8% in the South to 11.2% for the North region (Table 4). Across the country regions and states, the PPV for missing evolution data varies widely. Specifically, between 2007 and 2012, unfiled fields fell from 9.0% to 4.3%, a 51.7% decline. However, it increased in the Northeast and South regions.

Thumbnail
Table 4
Distribution of records with unfilled evolution of the case <evolucao> in the Information System of Notifiable Diseases (SINAN-AT), by region and federated unit. Brazil, 2007-2012.

In Brazil, between 2007 and 2012, the SIM had an expressive degree of incompleteness of the “work-related injury” field in all regions and federated units, but this has been decreasing, although slowly. In contrast, the proportion of ignored answers showed a slight increase throughout this time. For the SINAN-AT, the overall record quality of the “clinical evolution” field increased, which is a result of the completeness growth while there was a decrease in “ignored” answers. Moreover, the regions with the best SINAN-AT performance were the South and Midwest.

In addition, our data on unfiled <acidtrab> need to be interpreted with caution. First, in the electronic form used to feed the SIM, presumably because of the misconception of work-related injuries, the occupational injury option becomes disabled for cases when death is a consequence of violent events88. Drumond EF, Silva JM. Avaliação de estratégia para identificação e mensuração dos acidentes de trabalho fatais. Cienc Saude Coletiva. 2013;18(5):1361-5. https://doi.org/10.1590/S1413-81232013000500021
https://doi.org/10.1590/S1413-8123201300... ,2323. Waldvogel BC. Quantos acidentes do trabalho ocorrem no Brasil? Proposta de integração de registros administrativos. In: Gomez CM, Machado JMH, Pena PGL, organizadores. Saúde do Trabalhador na sociedade brasileira contemporânea. Rio de Janeiro: Editora Fiocruz; 2011. p.227-44.. Thus, even when death certificates are correct, violent-related deaths which could be classified as work-related injuries, are being coded as “homicides,” “suicides,” or “others” This was revealed by the almost total incompleteness of the field <acidtrab> in violent causes of death (99.7%). Narratives from workers in charge of on-line data entry confirm this hypothesis. Work-related injuries do not exclude events involving violence, although it is a common mistake not to recognize their causal relation to work, common in cases of homicides among security personnel.

The ignored marks in <acidtrab> or in <evolution> must be interpreted considering their operational meaning. The “ignored” code should be chosen when the true response is unknown, and does not represent an error or negligence. The “ignored” answer may be true, reflecting lack of knowledge about the causes of the event of interest, lacking family and colleagues’ information, the inability to carry out visits to workplaces or when the event had occurred for investigation. For <acidtrab>, the overlap between medical and legal aspects may imply failure to provide true responses, thus reducing the filler commitment for accurate recording. The understanding of “ignored” answers as indicating poor data quality is common in studies focusing on the quality of information.

The conclusions of this study should consider its methodological limitations. First, the most important aspect of information quality is the sub-enumeration of cases, which compromises the mortality estimate magnitude. However, in spite of multiple data sources, sub-enumeration was not examined given the difficulties for the identification of all cases, particularly, the lack of a common identifier in the anonymous available databases. Failure to fill <acidtrab>, for example, could be occurring for non-occupational injury cases, although it should be marked as “no”. Unfortunately, this could not be verified given the lack of appropriate data, the same reason why the high SIM field completeness was associated with ignored answers, i.e., lack of knowledge on work-relatedness, despite completion of the field. Regarding SINAN-AT, our conclusions need to take into account the stage of its implementation, not yet completed. The SINAN-AT development involves the training of personnel, often affected by an imbalance between the number of available health workers and the job task demands. Among the limits and challenges faced by the National Network of Integral Care for Workers’ Health (RENAST), the notification of work-related injuries is still under development. For the SINAN-AT, it is also important to consider that the PPV for unfilled boxes presented great variation across states which showed data overdispersion. Specifically, some states had no data for 2007, while in this same year, other states had very small estimates compared to 2012, which contributes to extreme PPV increasing, limiting conclusions.

It is important to notice that both the SIM and SINAN-AT capture work-related injuries for formal and informal workers, the latter excluded from workers’ health statistics until a few years ago, when only workers insured by the Social Insurance were considered.

This study advances the knowledge on the quality of available information systems, a fundamental aspect for workers’ health surveillance. The identification of FWA recording limits can help design strategies to overcome manageable problems. Further studies are recommended focusing on the field filling procedures by directly observing fillers on duty. Research with national estimates of FWA underreporting is also relevant to obtain accurate occupational injury mortality estimates. Our results support the need for consistent investments in the professional training of fillers, the monitoring of the information flow, the data review and analysis, and the dissemination of information, thus improving the quality of FWA data.

Figure   Proportion of records with ignored or unfilled <acidtrab> in the SIM and <evolution> in the SINAN-AT by federated unit. Brazil, 2007-2012. 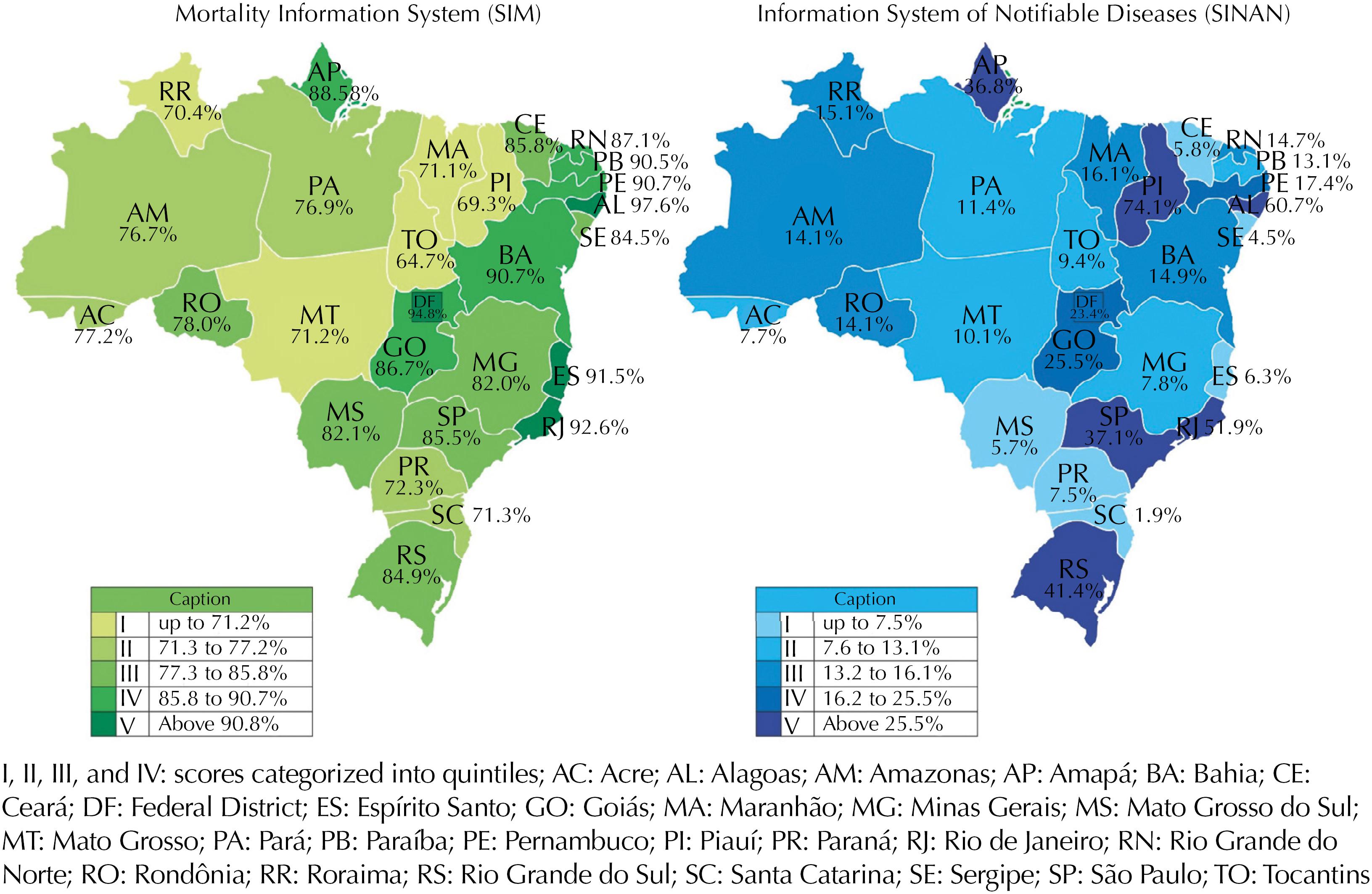 Table 2   Distribution of records with unfilled <acidtrab> in the Mortality Information System (SIM), by region and federated unit. Brazil, 2007-2012.

Table 3   Filing status of the field <evolucao> in the Information System of Notifiable Diseases (SINAN-AT), by calendar year. Brazil, 2007-2012.

Table 4   Distribution of records with unfilled evolution of the case <evolucao> in the Information System of Notifiable Diseases (SINAN-AT), by region and federated unit. Brazil, 2007-2012.