Profile of hospitalizations for neoplasms in the Brazilian Unified Health System: a time-series study

Describe the profile of hospitalizations for cancer diagnosis in Brazil from 2008 to 2018 at Unified Health System (SUS).

Together with cardiovascular, and respiratory diseases and diabetes, cancer is part of the set of chronic non-communicable diseases (NCDs) that cause the most deaths in the world. Cancer reaches individuals in all age groups. When it reaches the economically active young populations11. World Health Organization. Global Status Report on Noncommunicable Diseases 2014. Geneva (CH); WHO; 2014., it leads them to disabilities. Currently, cancer ranks second in the ranking of mortality due to NCDs, with an incidence of 24.3 million new cases worldwide in 201722. Instituto Nacional de Câncer José Alencar Gomes da Silva. Estimativa 2018: incidência de câncer no Brasil. Rio de Janeiro: INCA; 2017.,33. GBD 2017 Disease and Injury Incidence and Prevalence Collaborators. Global, regional, and national incidence, prevalence, and years lived with disability for 354 diseases and injuries for 195 countries and territories, 1990-2017: a systematic analysis for the Global Burden of Disease Study 2017. Lancet. 2018;392(101590:1789-858. https://doi.org/10.1016/S0140-6736(18)32279-7
https://doi.org/10.1016/S0140-6736(18)32... .

The SIH, established by Ordinance No. 896/1990 of the Ministry of Health, adopts the Hospital Admission Authorization as an instrument to be used by all public administrators and service providers of the SUS to record and process patient identification data, procedures performed, health professionals involved and hotel structure1515. Ministério da Saúde (BR). SIH – Sistema de Informação Hospitalar do SUS: manual técnico operacional do Sistema. Brasília, DF; 2017..

In this study, data extracted from SIH were tabulated in the TabWin program version 4.1.5. The national tables and definition files were obtained from the DataSUS website (http://www2.datasus.gov.br/DATASUS/index.php). The data, extracted in January 2020 and aggregated by year, refer to hospitalizations for malignant neoplasms that occurred in health facilities that were attended by the SUS from January 2008 to December 2018. While this study focuses on hospitalizations for malignant neoplasms, only hospitalizations corresponding to codes C00-C97 were considered, according to Chapter II of the 10th International Classification of Diseases (ICD).

The population data we provided by the Brazilian Institute of Geography and Statistics (IBGE) and were consulted in the statistical table database of the institute (https://sidra.ibge.gov.br/home/pms/brasil).

Where taxat is the rate of hospitalization for malignant neoplasms in the year t and u is the error of the regression. The coefficient β1 indicates the trend of the time series, so that the estimated value represents the change in log(taxat) for each additional year t. Thus, if the coefficient β1 is positive, the trend of the series is increasing and, if it is negative, the trend is decreasing. The rate transformation allows the trend to be expressed in percentage terms and aims to normalize the distribution and stabilize variance, which is one of the assumptions of the model.

The model was estimated using a generalized linear regression model, applying the Prais-Winsten estimation with robust variance. The method is indicated to adjust the existing serial autocorrelation in time-series analyses to heteroscedasticity and obtain robust statistics. From the robust variance, the appropriate confidence interval and p-value for statistical inference were calculated.

The data were analyzed in the statistical program Stata, version 16. Because this study avails itself of secondary data from the public domain, submitting the project for analysis by the Research Ethics Committee was not necessary, according to Resolution of the National Health Council No. 466/20121616. Conselho Nacional de Saúde (BR). Resolução Nº 466, de 12 de dezembro de 2012. Resolve aprovar as diretrizes e normas regulamentadoras de pesquisas envolvendo seres humanos. Brasília, DF: CNS; 2012 [cited 2020 Feb 5]. Available from: https://conselho.saude.gov.br/resolucoes/2012/Reso466.pdf
https://conselho.saude.gov.br/resolucoes... .

Thumbnail
Figure 1
Time series of the rate of hospitalization observed (points) and estimated (line)a for malignant neoplasms (number of hospitalizations per 100,000 inhabitants), per region. Brazil, 2008 to 2018.

Thumbnail
Figure 2
Time series of the rate of hospitalization observed (points) and estimated (line)a for malignant neoplasms (number of hospitalizations per 100,000 inhabitants), by demographic profile. Brazil, 2008 to 2018.

Tables 1 to 3 show the results of the trend analysis for the period 2008 to 2018 and the values of hospitalization rates for malignant neoplasms observed in the initial period (2008) and the final period (2018) of the historical series studied.

Table 3 represents the trends of hospitalization for malignant neoplasms in females and males for the 20 ICD codes with the highest hospitalization rates in 2018 for each sex.

The increase in hospitalizations among children and young people up to 19 years of age should be observed, since, because it occurs less in this age group, there is a lower supply of specialized services for this public. A study by Grabois et al. demonstrated the need to travel long distances so that young people and children receive adequate care1818. Grabois MF, Oliveira EXG, Carvalho MS. Assistência ao câncer entre crianças e adolescentes: mapeamento dos fluxos origem-destino no Brasil. Rev Saude Publica. 2013;47(2):368-78. https://doi.org/10.1590/s0034-8910.2013047004305
https://doi.org/10.1590/s0034-8910.20130... . This factor concentrates patients in certain locations, increasing the rate of hospitalizations or treatments in specific regions.

Planning the appropriate distribution of reference centers is important, considering that these are events with lower incidence rates and, therefore, the services will not be made available as often as those related to the most incident neoplasms, even to ensure qualified and specialized care for younger people. For this purpose, health care networks must work in an interconnected way, to direct the patient to the service that offers the indicated treatment.

The ICD code of other skin neoplasms appeared as the third cause of hospitalizations among men and the fourth among women. Studies conducted locally already pointed to this occurrence. Most neoplasms that affect the skin are treated at the outpatient level, even when they require surgical treatments. The importance of hospitalization rates due to skin neoplasms draws attention to the fact that life habits, such as protection against ultraviolet radiation, are fundamental to prevent the occurrence of this type of cancer. These data point out the need for prevention programs aimed at sensitizing the population on the subject2626. Dantas MM, Pires DAL, Schmitt DT, Nascimento VS, Turine CA. Estudo ecológico das internações por neoplasias malignas da pele na região norte no período de 2000 a 2014. Rev Cereus. 2016;8:23-40. https://doi.org/10.18605/2175-7275/cereus.v8n2p23-40.
https://doi.org/10.18605/2175-7275/cereu... ,2727. Guimarães RQ, Oliveira LCM, Calado VC, Barbosa RNF. Incidência de neoplasias malignas da pele no estado da Paraíba. Rev Saude Cienc Online. 2019;8:86-94. https://doi.org/10.35572/rsc.v8i2.46
https://doi.org/10.35572/rsc.v8i2.46... .

An important point observed in this study is the existence of health care voids in the most deprived regions, which forces patients to move to distant and specialized centers, often located in other states. It is noteworthy the need for further studies on this subject to be carried out.

Among the limitations of the research, it is worth noting that, as the data represent the number of hospitalizations, it is not possible to infer from them the incidence or mortality rates due to cancer. Not all patients diagnosed with malignant neoplasm are hospitalized, and the same patient may require more than one hospitalization per year, depending on the clinical picture and the evolution of the disease. It is also necessary to consider the cases of neoplasm treated in private care, whose information is not available in the database studied. In addition, it should be considered the fact that the oncological clinical treatment performed through chemotherapy and radiotherapy is processed by the Outpatient Information System (SIA), which was not used in this study.

Another limitation of this study is the absence of analysis of the interactions between the various subgroups analyzed. An example: although the trend for the age group from 20 to 29 years is unchanged, the behavior of the series may be different for men and women in the same subgroup.

Because this is a research conducted with secondary data, there could be a certain limit regarding the reliability of the data presented due to discrepancies in the collection of information or the registration in the SUS systems. However, the Hospital Information System is the official database of the Ministry of Health, and its data support the planning of care and the formulation or adequacy of public policies. Thus, despite possible limitations, the analyzed data can be considered valid. 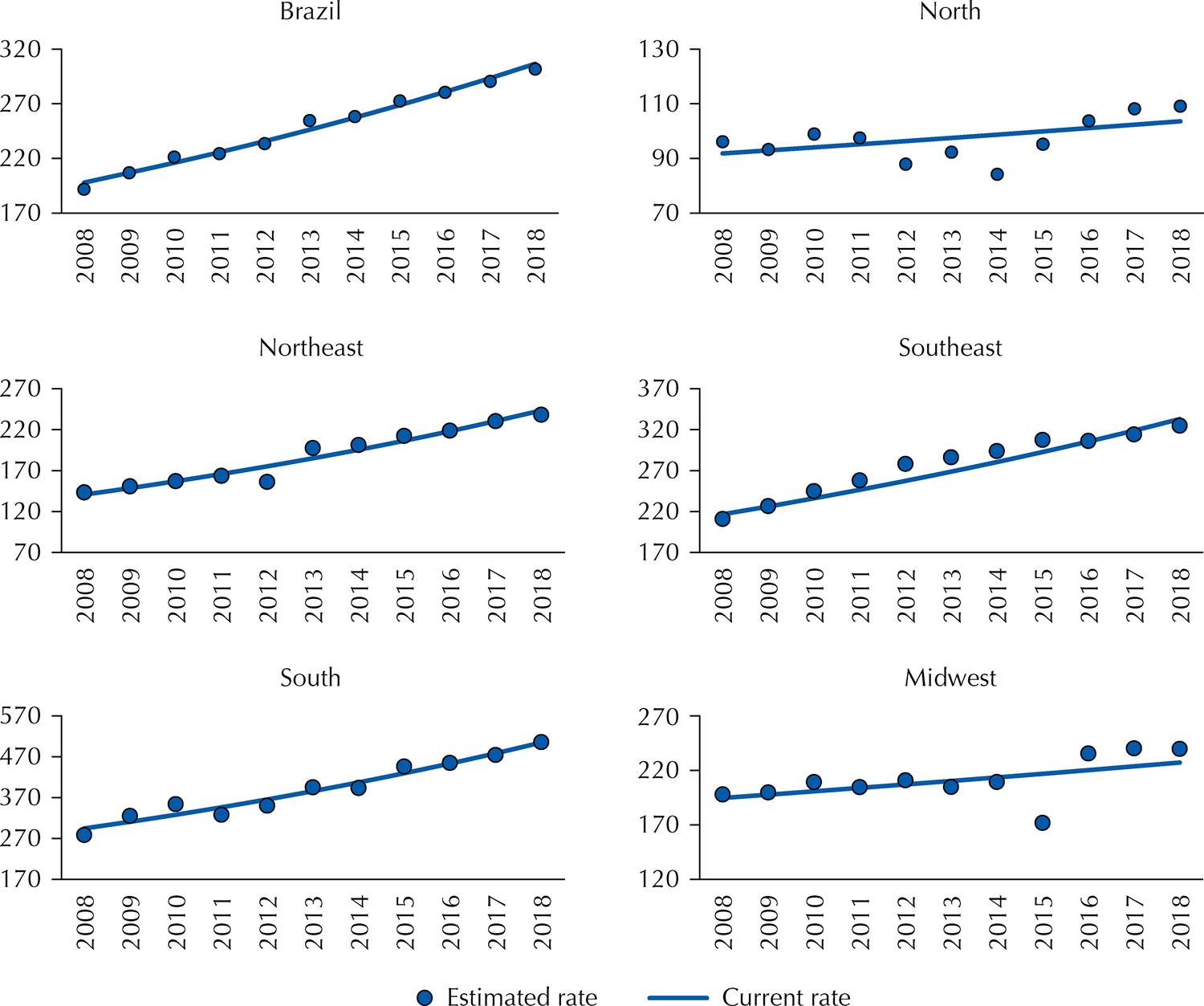 a Average annual percentage change of hospitalization rates calculated from the β 1 coefficient of the trend model estimated by generalized linear regression by the Prais-Winsten estimation13.

Figure 2   Time series of the rate of hospitalization observed (points) and estimated (line)a for malignant neoplasms (number of hospitalizations per 100,000 inhabitants), by demographic profile. Brazil, 2008 to 2018. 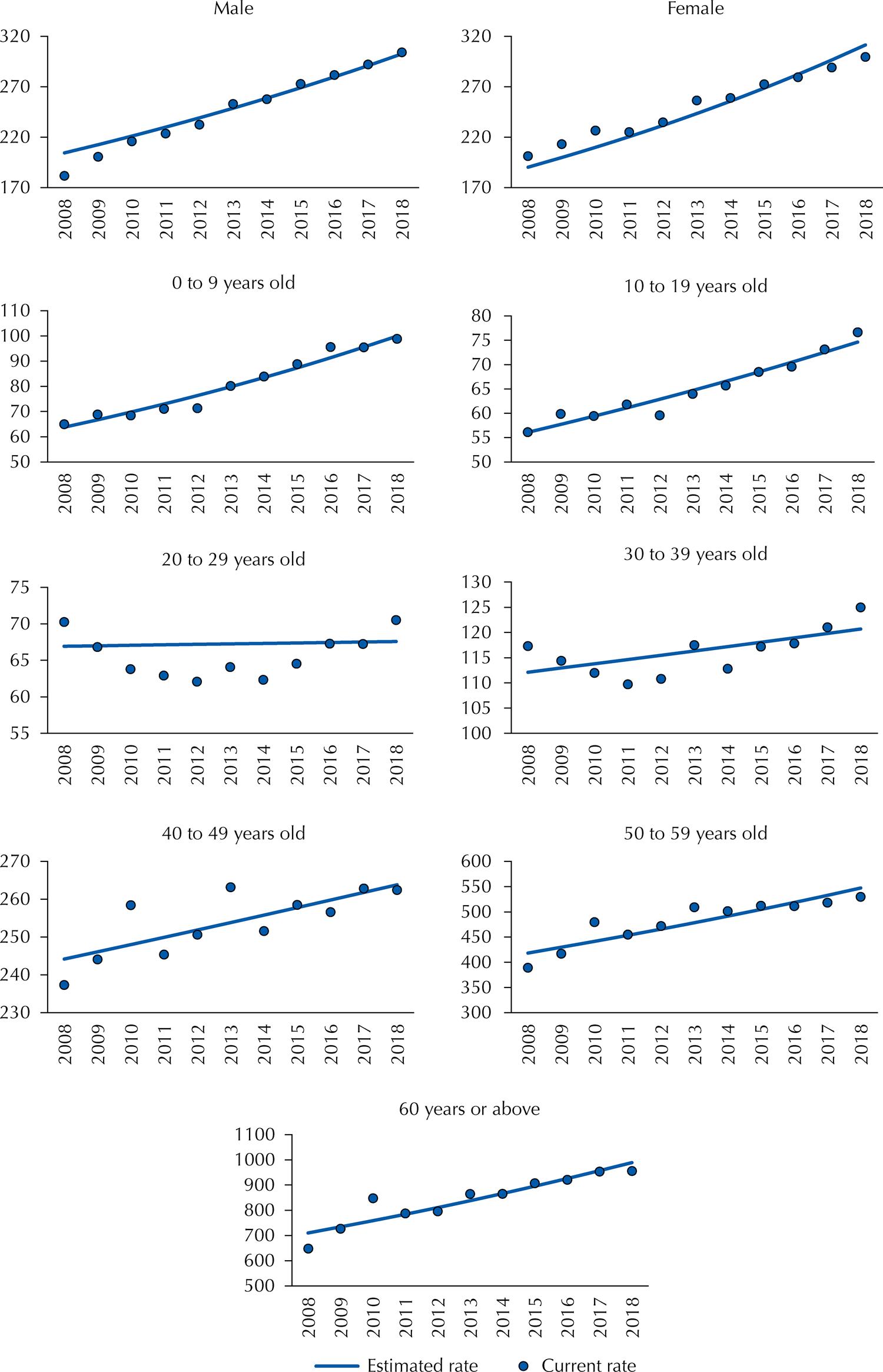 a Average annual percentage change of hospitalization rates calculated from the β 1 coefficient of the trend model estimated by generalized linear regression by the Prais-Winsten estimation13.