OBJETIVE: To describe the frequency of anemia and iron, zinc, copper and magnesium deficiencies among Mexican adolescents in the probabilistic survey ENSANUT 2006.
MATERIALS AND METHODS: The sample included 2447 adolescents aged 12 to 19 y. Capillary hemoglobin and venous blood samples were collected to measure the concentrations of ferritin, sTFR, CRP, zinc, iron, copper and magnesium. Logistic regression models were constructed to assess the risk for mineral deficiencies.
RESULTS: The overall prevalence of anemia was 11.8 and 4.6%, body iron deficiency 18.2 and 7.9% for females and males, respectively. Overall prevalence of tissue iron deficiency was 6.9%, low serum copper were14.4 and 12.25%; zinc 28.4 and 24.5%, magnesium 40 and 35.3%; for females and males, respectively.
CONCLUSIONS: There is a high prevalence of mineral deficiency in Mexican adolescents; females were more prone to have more mineral deficiencies. Nutritional interventions are necessaries in order to reduce and control them.

The deficiency of micronutrients is a health issue far from being resolved globally.1 Some mineral deficiencies as such iron and zinc impact negatively on physical growth, immune response, cognitive and emotional development, among others.2

There is limited information on the mineral status of copper and magnesium in adolescents. In adult German population, prevalence of magnesium deficiency reached 14.5%.3 Knovich et al reported an association between serum copper levels and anaemia in American population (NHANES II).4 Reports on the prevalence of anemia, iron and zinc deficiency are available for several groups of adolescents;5-7 varying from 2% to 5% for zinc deficiency in British, 43% in Ethiopia and over 50% in Sri Lanka population. Also were found 24% of iron deficiency in Sri Lanka. The Mexican National Nutrition Survey -1999 (NNS-99), described the prevalences of anemia, iron, zinc and iodine status in women between 12 and 49 years of age. The overall prevalence of anemia was 20.8%,8 iron deficiency was 40% and zinc deficiency 30%.9 However no distinctions were made for adolescents. No information is available for cooper and magnesium deficiencies in population-based surveys in Mexico. The objective of the present analysis is to describe the frequency and distribution of anemia and iron, zinc, copper and magnesium deficiencies among Mexican adolescents, aiming to identify opportunities for intervention.

Study population. Information for the present analysis was extracted from the dataset of the Mexican National Health and Nutrition Survey of 2006 (ENSANUT 2006). This is a probabilistic survey, representative at the national, regional, urban and rural levels.

A detailed description of the design and sampling procedures was published elsewhere.10 Demographic and socioeconomic information was collected using ad hoc questionnaires. Ethnicity was classified if an indigenous language was spoken. Localities with less than 2 500 inhabitants were considered as rurals. A socioeconomic index was constructed based on the household characteristics and family assets by a principal component analysis, the index was divided into tertiles being 1 the lowest. The country was divided in four geographic regions: Northern, Center, Mexico City and Southern. Anthropometric information (weight and height) was collected using validated and standardized methods.11,12 Body Mass Index (BMI) was computed based on height and weight.13

This sample (n= 2447), was extracted from the general dataset of the ENSANUT 2006 including 12-19 yrs of age with a blood sample available.

Venous blood samples were drawn and centrifuged at 268 g, in situ. Serum was separated and stored in coded cryovials, preserved in liquid nitrogen until delivery to a central laboratory in Cuernavaca, Mexico.

The total body iron (TBI) (mg/kg) was calculated based on the concentrations of sTfR and s-ferritin using the Cook's equation.14

Capillary hemoglobin was measured using a portable photometer. Anemia was defined when hemoglobin concentration (Hb) adjusted by altitude was <120 g/L for females or <130g/L for males.17 Iron deficiency anemia (IDA) was defined if an anormal Hb value coexisted with at least one of the following abnormalities: s-ferritin, sTfR or serum iron. Others causes of anemia were defined when they did not meet the above criteria.

Obtained using food-frequency questionnaire (FFQ) collecting information on the seven days prior to the survey, including 101 food items. The validation of the FFQ was published elsewhere.18 The intake of energy and macronutrients was computed; the intake in g/day was transformed into total energy, macro and micronutrients using the food composition tables compiled by Instituto Nacional de Salud Pública, combining the USDA Food Composition Tables, and other tables from Mexico and Latin America.18 The adequacy was referred to the Dietary Reference Intakes (DRI) of the Institute of Medicine of USA.19

The characteristics of the sample are described as frequencies and 95% confidence intervals, stratified by sex. The distribution of TBI, age and sex interactions were evaluated through multiple linear regression models. Logistic regression models were constructed to test the risks for low tissue iron, low serum zinc, copper and magnesium. Heterogeneity of effects by sex and age were tested adjusted by Socioeconomic Status (SES), BMI, CRP, dwelling, geographical regions, ethnicity and being beneficiary of Oportunidades.

Statistical significance was set at α=0.05 and α=0.1 for interactions. All analyses were adjusted for the sampling design of the survey, using STATA SE v11.

The protocol was approved by the Research, Ethics, and Biosecurity Comitee of Instituto Nacional de Salud Pública, Mexico. Individual assents and informed consent letters were obtained from the parents of all participants.

The geometric mean concentration of sTfR was 3.58±1 mg/L with no significant differences by sex. The overall prevalence of TID was 6.96% (Table II). 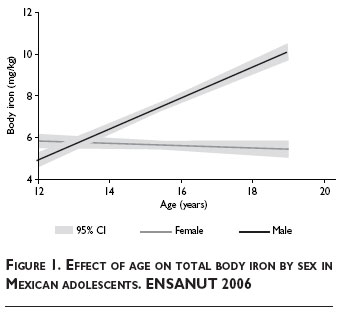 The overall prevalence of low serum copper was 14.14%; with not significant differences by sex. The prevalence was significantly higher in the Northern region (27.14%) than in the Center (11.8%) or the Southern (10.6%) regions; it was also lower in indigenous (7%) than in non indigenous (14.5%) subjects (Table III).

In a logistic regression model, the risk to suffer low serum copper increased with age in males (OR=1.18, p=0.01), but not in females (OR=0.96, p=0.58). Living in the Northern region (OR=2.79, p<0.001) represented a risk for low serum copper. No significant differences were observed by dwelling, SES or affiliation to Oportunidades (Table IV). Intake of copper, phytic acid and fiber (as tertiles) were not associated with LSC (data not shown).

The median of dietary intake of zinc was significantly higher for males (8.1 mg/d) than females (6.4 mg/d), with an adequacy of 93%.

In a logistic regression model, living in the Northern region was a risk for low serum magnesium (LSM) (OR=1.82, p=0.02). No significant associations were found with sex, dwelling, BMI, CRP, SES, ethnicity or affiliation to Oportunidades (Table IV). LSM was no associated with dietary intake of magnesium, phytic acid and fiber (data not shown).

We present evidence herein for a high prevalence of iron, zinc, copper and magnesium deficiencies in Mexican male and female adolescents. Females were more prone to suffer most of mineral deficiencies. When comparing the prevalence of LIS in female adolescents in the NNS-99 with those herein reported, there is a decrement in the prevalence (40.5% vs 18.4%).9,20 However, methodological differences may confound such a big decrease; in 1999 LIS was assessed by percent saturation of transferrin, while in 2006 a direct measurement of s-ferritin was used.

The puberty onset is probably critical to enhance the sexual differences in TBI in this study, i.e. a larger growth of muscle mass in males21 and losses of iron throughout menstruation results in larger TBI in males relative to females. Information on population based estimates of TBI are scanty; data from NHANES III reported in adults older than 20 years mean TBI values of 9.89 ± 2.82 mg/kg for males and 4.87 ±4.14 mg/kg for females,14 similar to those reported herein. We are aware that Cook's equation is not validated for adolescents, however, even if the external validity may be questionable, the internal validity allows for valid comparisons between both genders. We made efforts to homologate our TfR results to Cook's laboratory, correcting as by Ramco's kit.

In the present study, the majority of cases of anemia were not explained by ID; other nutritional causes of anemia as such folate and vitamin B12 deficiencies were not evaluated.22 However, the adequacy of the dietary intake of vitamin B12 was 110%, while the adequacy for folate was 70%. This may explain, in part, the high proportion of non IDA. Both, low and excessive copper serum concentrations are associated with IDA.4,23 In our study, adolescents with anemia had significantly higher serum concentrations of copper than their non anemia counterparts, in line with the reported by NHANES-II.4 The association between iron and copper deficiencies is most probably due to the role of copper as a cofactor of iron oxidizing proteins as such hefastin and ceruloplasmine.24

The possibility of subestimating ID as a cause of anemia could be influenced by acute infections and inflammation. However, the rate of acute infections at this age is low.25 We used a 6 mg/L cut-off for CRP, instead of the usual 3 mg/dL, because in a segmented regression model using data from two probabilistic surveys in Mexican population (n=5 000) the inflexion point for ferritin values occurred at a concentration of 6 mg/L of CRP (data not published).

The lack of population-based studies on copper status in adolescents prevents from an adequate comparison of our data. The prevalence of low copper concentrations among adolescent girls from Sudan was 5.9%;26 in Iranian pre and postmenopausal women was 17%;27 in Chilean adults the prevalence was 8.6% in males and 5.9% in females.28 The prevalence of low serum copper in our series is one of the highest in the literature. The rarity and letality of genetic diseases associated with copper deficiencies as such Menkes disease and aceruloplasminemia29,30 make difficult to invoke them as significant causes of this large proportion of LSC. It is possible that the higher copper requirement during the puberty growth spurt drains copper out of the circulation.30

The prevalence of zinc deficiency in female adolescents herein reported was similar to that in NNS-99 (29.7%). The overall prevalence was higher than reported for developed countries but lower than for developing countries. In American children 9-19 years of age, the prevalence was 1% for males and 1.3% for females.31 In British children 11-14 and 15-18 years of age the prevalence of zinc deficiency for boys was 0 and 2%, and for girls 2 and 5% respectively.7 Prevalence in Nepalese females 13-35 years of age, varied from 78 to 90%.32 The Mexican prevalence herein reported is lower than for Southeast Asia (71.2%), Africa (68%), East Mediterranean (73.5%) and the Americas (45.8%) but higher than for the West Pacific (18.6%) and Europe: 8.0%.1

The high prevalence of zinc deficiency is relevant for the future health of adolescents because it is associated with higher risks for low birth weight33 and impinges on physical growth in small children.34,35 It also affects negatively on the cognitive function and emotional performance.36

The prevalence of low serum magnesium in this survey is higher than the reported for German individuals (14.5%),3 though, they used a higher cut-off than in this study (1.85 mg/dL vs 1.82 mg/dL, respectively), it is not enough to explain such a large difference. It is more probable that an insufficient diet in Mexico, especially in animal tissue may explain such a difference. We were not able to find serum magnesium data from suboptimally nourished countries. The lower prevalence in the Southern region could be due to the observed higher daily intake of magnesium than in the Northern region (data not shown). We ascertained that the high prevalence was not due to an inaccurate magnesium determination, results were calibrated against NIST SRM 3131a reference materials.

The high prevalence of iron deficiency and low serum zinc, magnesium and copper detected in Mexican adolescents could be partially explained by their relatively high intake of antagonists of the absorption of those minerals, as such fiber, tannins and phytates,40 and low intake of enhancers of mineral absorption as such vitamin C.41 The best sources for iron, zinc and copper are animal tissues scarce in the Mexican diet, and could explain the coexistence of deficiencies of those minerals.

In summary we document here the prevalence and distribution of several mineral deficiencies including iron, copper, zinc and magnesium in Mexican adolescents. Despite several public nutritional interventions in Mexico provide iron and zinc supplementation, the prevalence of iron and zinc deficiencies are still very high, calling for a more careful examination of the effectiveness of those interventions in order to redesign them aiming for better outcomes.