OBJECTIVE: To examine knowledge of and self-treatment with antibiotics among medically-insured adults in Mexico.
MATERIALS AND METHODS: We conducted a cross-sectional, interviewer-administered survey among 101 adult patients seeking care for acute respiratory tract infections in a family medicine clinic in Mexico. Knowledge scores were calculated as a composite of correct, incorrect and don't know responses. Factors associated with antibiotic knowledge and antibiotic self-treatment were explored with bivariate analyses.
RESULTS: 47% of participants were taking antibiotics prior to the visit, 20% were self-treating. Antibiotic knowledge was highly variable. Many participants believed common non-antibiotic treatments for colds and coughs were antibiotics, such as ambroxol (45%), Desenfriol (45%) and paracetamol (44%). Older participants (>40 years) had better knowledge scores.
DISCUSSION: Self-treatment with and misperceptions about antibiotics are common among medically insured adults seeking medical attention in Mexico.

Multifaceted educational strategies have shown promise in reducing unnecessary antibiotic use, but their effectiveness may vary across different populations.13-18 One subgroup of particular concern consists of persons who use antibiotics without a prescription such as leftover antibiotics or antibiotics purchased in the community. Studies have highlighted a common practice of self-treatment of ARIs with antibiotics in Mexico, among immigrant Latino populations living in the US and in other countries.7,19-22 Self treatment with antibiotics is a concern not only because the antibiotics are frequently unnecessary, but also because patients may take these antibiotics sporadically (which breeds resistance), and in cases when they actually need antibiotics they may be taking the wrong antibiotic. Access to doctors and prescription medications is likely to be a key factor related to self-medication with antibiotics, although other social and cultural factors have been implicated as well.22-24

To control for lack of access to health care as a confounding factor among patients who self-treat with antibiotics, we conducted a study among primary care patients with health insurance who were seeking medical attention for ARIs in a Mexican integrated health care delivery system. In this study, we examined knowledge, attitudes and behavior related to antibiotic use for ARIs, and specifically examined the relationship between antibiotic knowledge and self-treatment with antibiotics.

An interviewer-administered patient survey was conducted in July and August 2009 at the Family Medicine Clinic in the Mexican Institute of Social Security (IMSS  Instituto Mexicano del Seguro Social) in Cuernavaca, Morelos, Mexico. The IMSS is a combined employer, State and worker sponsored, integrated health care delivery system that provides care to roughly 40% of the Mexican population. Being the main health system in Mexico, it provides services to formally employed workers and their families.

The study population consisted of a convenience sample of patients with ARIs over 13 years of age who were seeking medical attention for their illness. Potential participants (patients seeking care for ARIs) were identified by clinic staff and referred to study personnel for explanation of the study. Eligible patients were selected through consecutive sampling among those who fulfilled inclusion criteria.

The study was approved by the institutional review boards (Ethics and Research) of IMSS, the National Institute of Public Health, Mexico, the University of California, San Francisco, and Simon Fraser University, Canada.

The survey instrument consisted of 24 questions (a combination of 45 closed and open-ended items) related to age, sex, education, children in household, illness features, health care seeking behaviors, self-care (including antibiotic use), and knowledge about antibiotics. The instrument was refined following pilot testing with 25 clinic patients. After obtaining verbal informed consent from participants or parents for those less than 18 years of age, study personnel administered the survey instrument and documented all patient responses verbatim. Each survey took approximately 10 to 5 minutes to administer.

We restricted our analysis to patients presenting with upper ARI symptoms (nasal discharge, nasal obstruction, sneezing, sore throat, cough, and ear pain), headache, malaise or fever, of < 21 day. Exploratory analyses were performed on key variables to assess the distribution of responses. We created an overall summary score for accurate antibiotic knowledge related to which medications are and are not antibiotics (see list in Table II). Participants received a score of +1 for correct identification of the medication, a score of -1 for incorrect identification, and a score of 0 if they answered "don't know". The list included four true antibiotics, and eight non-antibiotics. Thus, maximum and minimum scores were ± 12, ± 8 and ± 4 for all medications, non-antibiotic medications and antibiotic medications, respectively. Antibiotic knowledge scores were compared between groups of age, sex, and prior antibiotic use by using unpaired t-test, and across different strata of education level, and self-treatment using ANOVA. All analyses were performed using SAS version 9.s (Cary, North Carolina).

One-hundred one patients fulfilled inclusion criteria and completed interviews. Study population characteristics are shown in table I. The average age of participants was 41 years, two-thirds were female and a minority (39%) had received more than a middle school education; 30% were illiterate or having only elementary school. A variety of symptoms was present among participants, most commonly sore throat (67%) and cough (53%). Almost one-third reported a previous doctor visit for the present illnessthe vast majority within the same delivery system.

Participants' knowledge about which medications are antibiotics is shown in table II. There was wide variation in accurate knowledge across a range of cough and cold medications, including medications that are not medically indicated for ARI management such as captopril (anti-hypertensive) and pravastatin (cholesterol lowering medication). Cold remedies commonly used in Mexico were frequently identified as antibiotics, such as ambroxol (45%), Desenfriol (45%) and paracetamol (44%).

Overall knowledge scores were substantially lower among participants younger than 40 years of age compared with older adults, but did not vary significantly by sex or education level, although there is a trend for higher score among higher educated patients (table III). Knowledge scores also did not vary among persons using and not using antibiotics prior to the visit, nor among those self-treating with antibiotics (although sample sizes are quite small for these comparisons). 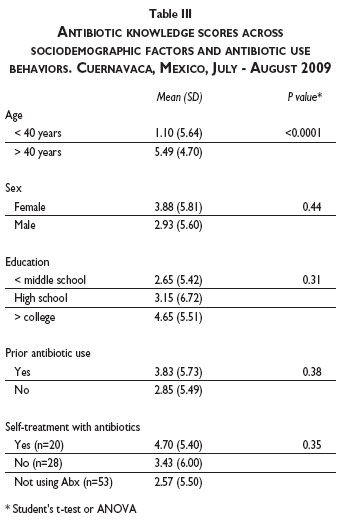 Approximately half (47%) of our sample had taken antibiotics for the illness for which they were seeking care (data not shown). A doctor's recommendation accounted for only half of the antibiotics previously taken. Forty percent of participants taking antibiotics had initiated them on their own. In addition, a significant proportion of participants (26%) reported using antibiotics that were not actually antibiotics.

Approximately half of the medically-insured adults seeking medical attention for ARIs in our study in Mexico was already receiving treatment with antibiotics prior to their doctor's visit, and forty percent of these patients were self-treating with antibiotics. This estimate is similar to studies with community-based samples.21,25 Various studies have remarked on longstanding practices of self-medication of the public with antibiotics, the ready availability of antibiotics often without a prescription, attitudes endorsing use of antibiotics for a wide range of illnesses, and patterns of over-prescription and inappropriate prescription in Mexico and among Latinos in the US.23; 26-30 In recent years, programs dedicated to controlling antibiotic resistance by the World Health Organization and other international organizations (and formal, intersectoral declarations that highlight such concern) aim to improve the knowledge, attitudes, and practices that underlie inappropriate antibiotic use.31 Against that macro-level context, it is important to develop national and community-level programs, and to be effective, these should be based on understanding of current patterns of belief and use.

Our study's findings should be interpreted in light of its limitations. Our study population consisted of a convenience sample of patients, and may not fully reflect the broader population of adult Mexican primary care patients in IMSS. We also cannot be certain to what extent well-described research biases observed in Latino patients in US studies were also present in our study such as simpatía (in which participants tend to give the socially desirable answer instead of the truth). If this were present, it is likely our study's estimate of self-treatment with antibiotics might have been even higher (for example, if patients over-reported how frequently the antibiotics they were taking were prescribed or recommended by a physician).

In conclusion, these findings suggest that antibiotic self-treatment of ARIs is common among medically insured primary care patients in Mexico. Educational efforts to promote appropriate antibiotic use, and to encourage antibiotic use only if a doctor prescribes it, will require broader-scaled strategies such as education tailored to the community, directed at pharmacies, and addressing family influences on antibiotic self-treatment. Educational strategies will also need to ensure that the population understands which medications are actually antibiotics. Further studies are necessary for identifying antibiotic knowledge and self-treatment in other populations, such as those affiliated with different health institutions. In addition, it will be necessary to consider the new legislation recently established in Mexico that forbid the sale of antibiotics without medical prescription.

This study was funded in part by a Fulbright Garcia-Robles All Disciplines award #8584 (RG).

10. World Health Organization. Interventions and strategies to improve the use of antimicrobials in developing countries: a review. Geneva:WHO/CDS/CSDR/DRS/2001.9, 2001.

27. Céspedes A, Larson E. Knowledge, attitudes, and practices regarding antibiotic use among Latinos in the United States: review and recommendations. Am J Infect Control 2006;34:495-502.