OBJECTIVE: To examine the independent relation of physical activity (PA) and cardiorespiratory fitness (fitness) with measures of obesity in Mexican children.
MATERIALS AND METHODS: Children (N=193) in 5th and 6th grade from Guadalajara participated. Body mass index (BMI), sum of skinfolds (SS) and waist circumference (WC) were measured. PA was measured over four days using pedometry and fitness was measured using the 20 meter shuttle-run test.
RESULTS: Fitness and PA were negatively related to the obesity measures in boys and girls (r=-0.57 to -0.64 and r=-0.18 to -0.23 respectively). Age adjusted significant differences in WC, BMI, and SS were observed between the lowest and highest fitness tertiles for boys and girls (p<.01). Age, gender, and PA adjusted fitness explained 23 to 34% of the variance on WC (r2=0.23, p<.01), BMI (r2=0.23, p<.01), and SS (r2=0.34, p<.01).
CONCLUSION: Fitness is a stronger correlate and better predictor of obesity than PA in this sample.

There is a high prevalence of overweight and obesity among children around the world.1 In Mexico, the prevalence of overweight and obesity in schoolage children, as determined by body mass index (BMI), has increased at an alarming rate in the last two decades,2 reaching 26% among 5 to 11 year olds.3 This trend is concerning given the health problems that obese children are more likely to develop including elevated cardiovascular and metabolic risk factors and decreased quality of life.4-6 It has been shown that a lack of physical activity and a low cardiorespiratory fitness (hereafter referred to as fitness) are associated with total obesity7,8 and with abdominal obesity9,10 in children. What is unclear however, is which factor, fitness or physical activity, has the strongest association with obesity in children.

Given that evidence is inconclusive and that no studies have investigated these associations in Mexican populations, the purpose of this study was to examine the independent relation of objectively measured physical activity and fitness with measures of total and abdominal obesity in Mexican children.

This cross -sectional study was conducted in Guadalajara, the second most populated city in Mexico. The study sample was selected by convenience and included 193 boys and girls in grades 5 and 6 from four public elementary schools in an urban zone of Guadalajara. Two schools had a morning shift and two an afternoon shift; all of them were of a low socioeconomic status. Data were collected in November of 2009. Children's assent to participate was obtained as well as signed informed consent from their parents/caregivers. This study obtained ethics approval from the institutional ethics boards at the Civil Hospital of Guadalajara and Queen's University (Kingston, ON, Canada).

Anthropometric measures were taken by trained anthropometrists following the protocol from the Canadian Physical Activity, Fitness, and Lifestyle Approach.23 Waist circumference was measured with a K-E anthropometric tape positioned horizontally mid-way between the bottom of the rib cage and the iliac crest. A single measure was taken at the end of a normal expiration and recorded to the nearest 0.1 cm.

Physical activity was measured with Digiwalker Yamax SW200 pedometers over four consecutive week days. Children were provided with pedometers and instructed on how to use them. Teachers were also instructed about the use of the device and about how to demonstrate its use to children. Children were instructed to wear the pedometers during all waking hours; from when they awoke until they went to bed and repeated this process each day. Members of the research team attended the schools to provide instruction and to record step counts at the start of each school day. The average daily step count over the four day measurement period was used as the summary physical activity measure.

The 20 meter shuttle run test24 was used to measure fitness. All testing was completed on a firm and level surface (concrete play area at each school). For this test, children were required to run back and forth between two lines placed 20 meters apart. A sound signal was emitted from a pre- recorded tape to dictate running speed. Frequency of the sound signals increased such that running speed increased by 0.5 km/hour each minute from the starting speed of 8.5 km/ hour. The test ended when children could no longer keep pace with the sound signal. The last stage that children reached was used to predict maximal oxygen uptake (VO 2max) from the running speed corresponding to that stage (VO2max = 31.025 + 3.238 X - 3.248 A + 0.1536, where X = the final speed and A= age).

Descriptive statistical analyses were conducted to explore the characteristics of the data and to assess statistical assumptions. Independent samples t-tests were used to test for gender differences in the study variables. A one-way analysis of covariance, using Bonferroni post hoc comparisons, was used to test for differences in the obesity measures across the low, moderate, and high physical activity and fitness tertiles with age as covariate. The strength of the associations between variables was determined using Pearson correlation coefficients. Finally, hierarchical linear regression was used to determine the independent contributions of physical activity and fitness on predicting the obesity measures. Statistical significance was set atp < .05. All statistical analyses were performed with the Statistical Package for Social Sciences version 18 for Windows.

Study participants consisted of 98 boys (51%) and 95 girls (49%) in grades 5 and 6 with a mean age of 11 years. As shown in table I, fitness and the three obesity measures were not significantly different across gender (p >.05). Similarly, there were no significant differences in the prevalence of overweight and obesity between boys and girls as determined by BMI. Physical activity was significantly higher in boys than in girls (17996 vs. 13372 steps/day, p < .001). 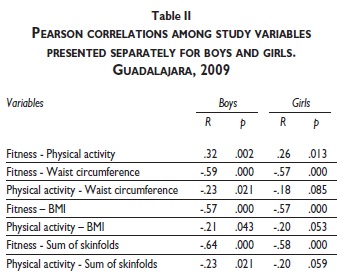 Objectively measured physical activity and fitness were negatively associated with measures of total (BMI, sum of skinfolds) and abdominal (waist circumference) obesity in this sample of 10-13 year old Mexican children. The associations with the obesity measures were stronger and more consistent for fitness than they were for physical activity. Furthermore, when fitness and physical activity were considered in the same regression model, only fitness was a significant predictor, explaining 23 to 34% of the variance in the obesity measures.

The results of the present study of Mexican schoolchildren suggest that fitness is a stronger correlate and predictor of total and abdominal obesity than is physical activity. Although few studies have compared the strength of these associations, those existing have found similar results. For instance, within a sample of 244 children aged 7 to 10 years old from Dublin, Hussey and colleagues found that fitness and physical activity were related to waist circumference, with the stronger correlations being observed for fitness.20 In that study, fitness was assessed using the 20 meter shuttle run test and physical activity by accelerometry during four days. Similarly, Ekelund and colleagues found that fitness, measured by indirect calirometry, was significantly associated with body fat estimated by skinfold thickness, whereas physical activity measured through the minuteby-minute heart rate monitoring method was not, in 82 adolescents between 14 and 15 years of age.19 Finally, Tell and Vellar found that fitness, measured during submaximal bicycle exercise, was a stronger correlate of BMI and triceps skinfold thickness than self-reported physical activity in a sample of 413 boys and 372 girls, ages 10 to 14 years.21

It has been reported that fitness is a powerful marker of health given that is associated with both total and abdominal obesity,25 which is consistent with findings presented here. The strongest association observed was that of total adiposity, followed by abdominal adiposity and BMI. Because BMI does not measure fat mass or fat distribution directly, it can misclassify individuals (e.g., a mesomorphic child may be incorrectly classified as obese). Consequently, additional obesity indicators were used in the present study which provided better estimates of adiposity.

Because children spend a significant amount of their time at school, strategies for promoting physical activity and fitness among children can be implemented in this setting. The physical education class provides an opportunity to engage children in vigorous-intensity physical activities that can improve fitness. For example, physical educators could promote fitness during the class by including aerobic physical activities such as running, that are of a prolonged duration and that make children work at a moderate-to-vigorous intensity. Finally, given that fitness is associated with obesity in both boys and girls, the regular assessment of fitness in schools could help identify unfit children that are at a higher risk of obesity and its related health ailments, and remedial activity programs could be employed.

The present study has some limitations. The sample size was small and selected by convenience, which compromises the generalizability of the findings to a broader Mexican population. Furthermore, the crosssectional design prevents us from drawing more robust conclusions on the causal relations between fitness and physical activity with obesity. Another limitation was the physical activity assessment, which, although objective, was subject to problems. Specifically, children may not have worn the pedometer properly or may have tampered with it. Moreover, pedometry measures were only obtained on weekdays, which prevented us from capturing the physical activities that children performed during the weekend. Another limitation of the pedometers used in this study is that crucial information about the intensity and frequency of physical activities was not obtained.26 Accelerometers, on the other hand, can measure both the intensity and frequency of physical activity and provide a better measure of this complex behaviour. Information about the physical activity intensity could contribute to a better understanding of the relationships among physical activity, fitness and obesity and may explain the apparent inconsistency of the present findings with some of the research discussed above.9,17,18

This study investigated the strength of the independent associations of physical activity and fitness with total and abdominal obesity in Mexican 5th and 6th graders. We conclude that fitness is a stronger correlate and better predictor of total and abdominal adiposity than is physical activity in this sample of Mexican schoolchildren. Nevertheless, the importance of physical activity in preventing obesity and promoting improved fitness should not be discounted as physical activity is the only modifiable determinant of fitness. This evidence is important given that it can help guide future public health initiatives aimed at battling childhood obesity in Mexico. Research involving larger, more representative population samples is required to further explore these associations in Mexican children.

27. Ekelund U. Cardiorespiratory fitness, exercise capacity and physical activity in children: are we measuring the right thing? Arch Dis Child 2008; 93(6): 455-456.