Materials and methods. The perspective used was health care payer. We estimated DMC associated with RDS management. The pattern of resource use was established by reviewing clinical records. Microcosting and bootstrap techniques were used to obtain the DMC. Estimated costs were reported in 2011 US dollars.

Results. Average DMC per RDS event was 14 226 USD. The most significant items that account for this cost were hospitalization (38%), laboratory and diagnostic exams (18%), incubator time (10%), surfactant therapy (7%), and mechanical ventilation (7%).

Conclusion. Average DMC in NB with RDS fluctuated in relation to gestational age weight at birth and clinical complications presented by patients during their hospitalization.

In general, neonatal mortality accounts for ~40% of deaths in children under five years of age.1 After 28 weeks of gestation (WG), neonatal mortality rates are closely linked with prematurity.2 The risk of premature births in the general population is estimated at ~6 to 10%.3

Respiratory distress syndrome (RDS) is a clinical condition seen almost exclusively in preterm newborns (NB) characterized by respiratory distress, cyanosis, and tachypnea, beginning after birth and increasing in severity during the first two days of life.4 The presence of RDS is inversely proportional to gestational age and birth weight; thus, it is estimated that in NB <30 WG, the condition occurs in ~60%, in NB between 32 and 36 WG it occurs in 15 to 20%, and at >37 WG the condition is seen in 5% of NB.5

In addition to prematurity, other risk factors associated with the development of RDS are male gender, Caucasian, history of maternal diabetes, perinatal asphyxia due to hypothermia, multiple pregnancy, or cesarean birth.6-10

Treatment of RDS is multidisciplinary and should preferably be carried out in the neonatal intensive care unit (NICU). Basic care must focus on minimizing stress and maintaining the NB under the most optimal physiological conditions. To accomplish this, adequate oxygenation (with or without mechanical ventilation [MV]) and normal temperature must be maintained (use of incubators), as well as maintaining cardiac and renal function within normal limits. Specifically, use of exogenous surfactant is currently recommended.11

In economic terms, patients with RDS represent a major burden within the health system because their management requires a substantial amount of resources.12 A follow-up study of 117 patients in Canada reported the cost of care required by NB with RDS over a two year period. The study found that a high proportion of costs accounted for the initial episode of hospitalization (82%), whereas 76% of costs were due to hospital management in the NICU.13

As a reference for Mexico, for the population covered by the Mexican Social Security Institute (IMSS, for its Spanish acronym) in 2008, the unit cost based on diagnosis related groups (DRG) for an RDS event or for an extremely premature neonate was 8449 USD. In the case of patients who developed major complications, the costs were 31478 dollars per case and for NB without major complications, cost were 2700 USD (updated to 2011 prices).14-16

The large difference between the fees paid by SPSS and the per capita payment (8 449 vs 3 448 USD) shows the need for a detailed cost analysis of the care of these patients and a careful assessment of these variations. Besides, the information reported by the SPSS did not include the detailed use of resources for the different types of patients in terms of gestational age or according to the presence of complications.

This information is relevant to the economic evaluation of interventions and/or health technologies because data for the population of interest is used to extrapolate data for other populations.12 Faced with the limited information concerning the cost of treating NB with RDS in Mexico, this study was performed to estimate the direct medical costs (DMC) of such treatment.

We performed a retrospective and descriptive study to assess DMC in NB with RDS treated in two specialized public hospitals in Mexico City and paid through the FPGC.

The perspective used in the study focused on the Public Health Sector, as the health care provider in Mexico. Patients were classified according to gestational age. This was done to identify differences in use of resources because it would be expected that, with greater disease severity, resource allocation would be higher and would correspond with the highest degree of prematurity. In this way, four groups were comprised: a)NB <28 WG; b)NB 28-32 WG; c)NB 33-37 WG, and dNB >37 WG.

A second classification criterion was the development of clinical complications after RDS resolution. This criterion differentiates the DMC to meet the initial hospitalization event and the cost of follow-up care. Complications of RDS were bronchopulmonary dysplasia (BPD), pneumonia, intraventricular hemorrhage (IVH), hydrocephalus, and apnea.18

The time horizon analysis applied to the initial hospitalization event is regarded as the time of the patient's hospital admission until discharge (high for either improvement or death). For cases with RDS-associated complications, the time horizon covered up to two years.

The sample comprised patients treated at two specialized public hospitals: Hospital Infantil de México Dr. Federico Gómez (HIMFG) and Hospital General de México (HGM). Both hospitals treated 43% of paid cases with RDS through FPGC in Mexico City during the year 2008. FPGC pays fees to the service providers so that they are able to provide high specialization medical services to the population not covered by Social Security.17 The protocol was approved by HIMFG's the institutional Ethics Committee.

Non-probability sampling technique was used to complete a quota of cases with RDS as primary admission diagnosis in the two specialized hospitals. The quota was set at 70 cases based on the sample size for estimating averages in a probabilistic sample,18 considering 95% confidence interval, 80% sampling power, standard deviation of 54 000 dollars19 and 15% losses.

Identification of resources used in patient management was performed by reviewing clinical files. Data collection instruments were constructed based on clinical guidelines for treatment of patients with RDS14 and were then adjusted and validated by a panel of experts: department heads and physicians specializing in neonatology and pediatrics at the same hospitals where patients were recruited.

Items included in DMC were hospital bed days, days in NICU, intermediate care days, days with respiratory support, days in an incubator, number of interconsultations, laboratory and diagnostic exams, surgical procedures, blood component transfusions, and use of parenteral nutrition and drug treatment, including the use of surfactant. Estimation of DMC was done by combining the techniques of average costs for services and surgical procedures. For drug prescriptions and surfactant treatment microcosting was applied. Average costs used corresponded to recoverable quotas for medical services of each hospital published for 2009.20

For drug prescriptions and surfactant treatment, costs were estimated according to the presentation and unit purchase price reported for basic drugs and equipment for patient treatment (2009).21 Costs were expressed according to October 2011 prices in USD. We applied the inflation factor reported by the Bank of Mexico16 and used an exchange rate of 1USD= 13.46 pesos.15

The study population was characterized using frequency tables and simple percentages. We assessed differences in resource use among the four age groups of children using Wilcoxon and rank-sum test.22

For the estimation of direct medical costs, we calculated means and confidence intervals adjusted through bootstrapping for mean difference. Bootstrapping has the advantage of avoiding parametric assumptions of normality, allowing more robust inferences about distribution of costs.23 The nonparametric bootstrap procedure consists of repeated sampling from the observed data; 1 000 resamples were obtained to estimate a bootstrap confidence interval.2 The estimation was performed using STATA™ software. 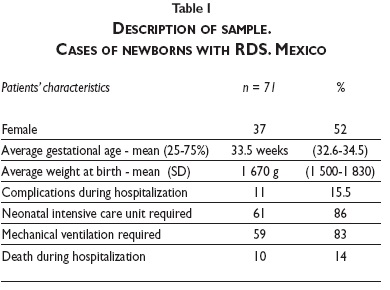 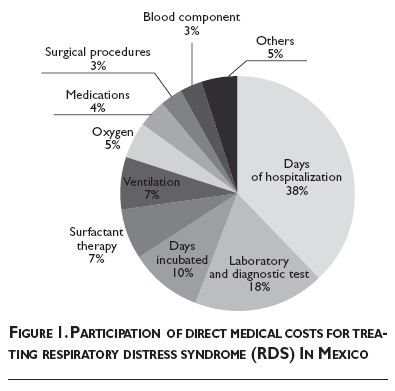 Cost of RDS according to gestational age

Costs according to patients who died and survived

Of all patients, 15.5% (11 NB) were reported to have complications associated with RDS. In these patients, costs included up to two subsequent years. Average DMC of NB with complications was 3035 USD. Patients who incurred higher costs were those with hydrocephalus (10546 USD) and intraventricular hemorrhage (4168 USD), whereas those patients with BPD (2101 USD), pneumonia (1738 USD) and apnea (2469 USD) had lower costs (data no shown).

In our study, average DMC for an event of NB with RDS was 14 226 USD, we found differences in terms of gestational age and weight at birth of the NB, as well as in the presence of complications and death during hospitalization.

Based on our results, neither IMSS DRG's cost nor SPSS fees cover the DMC. The fees paid by FPGC covers only 25% of the DMC according to our estimates, although the concepts covered by the amount paid by SPSS are not known (wheter such amount was intended to cover only the cost of surfactant treatment, or other costs).

In the analysis by age group, the amount payed by the FPGC covered only the cost of premature to term (>37 WG) babies. So it would be advisable to know the methodology used by SPSS for the calculation of payments and the concepts covered by these resources, to ensure a proper care of patients.

Previous studies have reported the main factors that affect the cost of patients with DRS, which agree with our results.

Using the above information it can be demonstrated that DMC in NB with RDS is multifactorial. Factors identified here are WG at birth, weight of the child at birth, the presence of complications, and death.

Disease management require large resources utilization, which was intensively established by the fact that 86% of patients required management in the NICU; 56% of costs comprised components such as lengthy hospitalization (up to 36 days), use of a large number of laboratory and diagnostic exams, and high number of consultations, as well as the need for surfactant treatment and MV. The cost predictive model of Zupancic and colleagues24 reported that the main factors that explain the daily cost of care of premature infants are surfactant therapy, x-ray studies, blood transfusions, surgeries, and echocardiography. Although the cost items identified in this study are different from those used by Zupancic and colleagues,24 results of their model are similar except that the costs of MV and medication outweigh surgical procedures or blood component products.

Regarding the limitations of our study, we found that the sample was not selected randomly, so the representativeness for the nationwide population requiring RDS treatment could not be warranted. However, as mentioned these two hospitals treated >43% of RDS cases paid for and reported by the FPGC in the year of analysis.

Another limitation is the small number of patients who presented complications, a larger number would have been useful for more accurate results, although the actual limitation was the incidence of cases in the population.

In other countries, DMC due to complications in patients who died may also lead to underestimation of costs; however, no information is available on the subject in our country.

Average DMC for NB with RDS presents important fluctuations (23-142%) because the use of resources is relative to gestational age, birth weight and clinical conditions of patients during hospitalization.

24. Efron B, Tibshirani RJ. An introduction to the bootstrap. Vol. 57, Monographs on Statistics and Applied Probability. NewYork: Chapman and Hall/CRC, 1993.