Primary drug resistance in a region with high burden of tuberculosis. A critical problem

Objective. To determine rates of drug resistance in new cases of pulmonary tuberculosis in a region with a high burden of the disease.

Conclusion. Our rate of drug resistant tuberculosis in new cases is very high; this has important clinical implications, since even monoresistance can have a negative impact on the outcome of new cases treated empirically with a six month regimen.

Drug-resistant tuberculosis (DR-TB) poses a serious challenge to global control of TB.1 Although multidrug-resistant TB (MDR-TB) has been extensively researched, there is a gap in the literature on the management of monoresistant and polyresistant forms of tuberculosis.2 Mono- and polyresistance to first-line antituberculosis medications is an ongoing global health problem; in particular, resistance to isoniazid (INH) is very common, with a global prevalence of 10% among new cases and 28% among previously treated cases.3

Although DR-TB is usually diagnosed in previously treated patients, it can also be observed in new, previously untreated cases, due to transmission of drug-resistant strains in the community.4

In many countries new cases are diagnosed based only on microscopy, and consequently DR-TB will go undetected. Our objective was to determine the rate of drug resistance in new cases of pulmonary tuberculosis in a high TB burden region.

Tijuana (population 1 559 683)5 has the highest rate of tuberculosis (40-50 cases per 105) in Mexico; an average of 1 000 cases is diagnosed annually, of which 70% are new. We asked the health centers in the city to refer new TB suspects for culture and drug susceptibility testing (DST) to the TB laboratory at the Tijuana General Hospital; due to resource limitations we cultured new cases only once a week. The study period included subjects from January 1, 2011 through June 30, 2013.

The study protocol was approved by the ethics committee of the hospital. Subjects were required to sign an informed consent to participate.

A total of 214 subjects with clinical suspicion of tuberculosis were referred for culture. Mean age was 38.5 ± 13.9 years; 146 (67%) were males. All the subjects had had productive cough for more than two weeks. Nineteen subjects (8.8%) had a positive HIV test. 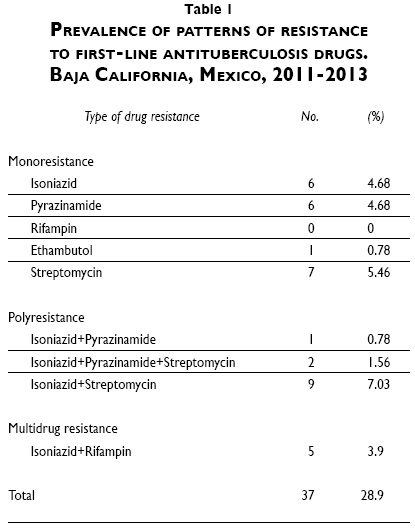 In most developing countries DST is reserved for patients who experience treatment failure or are undergoing retreatment. In the absence of routine DST, new cases will receive a standardized regimen that includes four first line drugs.6

In contrast, treatment of drug-resistant tuberculosis often requires second-line drugs and should be guided by DST results. Unfortunately, in many countries with high rates of drug-resistant tuberculosis, new cases with undiagnosed drug-resistance are treated empirically with first-line drugs, based only on microscopy results. There are several reasons that explain the adoption of this programmatic policy, the most significant being the absence of laboratory facilities capable of performing DST and a limited access to second-line drugs.4

Standardized short-course chemotherapy with first line drugs has been shown to be less effective against drug-resistant tuberculosis than against drug-susceptible tuberculosis.4 A recent global meta-analysis among patients with INH monoresistance found failure rates ranging from 18 to 44%.7 A study conducted in Tomsk Oblast, reported that 70.8% of patients with pretreatment isoniazid- or rifampin-resistant strains (but without MDR-TB at onset), were found to have developed MDR-TB after treatment had failed.4 The optimal management of INH monoresistant TB has been widely debated; current global recommendations are that INH monoresistant TB should be treated with a 9-month regimen of daily rifampin, pyrazinamide and ethambutol (9RIF+PZA+EMB).8

Pirazinamide [PZA] has an important sterilizing effect, and significantly reduces relapse rates in patients treated with a 6-month regimen (ZINH+RIF+PZA+EMB/4INH3RIF3). Patients with monoresistance to PZA have higher rates of relapse, failure and mortality when compared with those of patients with full susceptible strains.1 Loss of PZA from the regimen requires prolonging the duration of therapy with INH and RIF by 3 months, for a total of 9 months therapy.9

Roughly, one fifth of our new cases were resistant to INH; this scenario carries a very high risk of amplification of resistance during the continuation phase; a patient with an INH resistant strain would be in monotherapy with RIF for four months and vice versa. In both cases the development of MDR-TB would be highly likely. This risk would be higher in polyresistant cases that are left with a very weak standardized regimen. Finally, a new MDR-TB case will certainly extend its resistance pattern to EMB, PZA or both.

Early diagnosis of drug resistant tuberculosis and the judicious use of second-line drugs are recommended to decrease transmission of drug-resistant strains and to prevent the creation of multidrug-resistant strains.4 Thirty-five years ago Stefan Grzybowski wrote: "It is far better to do nothing than to treat the cases badly".10 We agree.