Influence of parental perception of school safety and gender on children's physical activity in Mexico: A cross sectional study

Objective. This cross sectional study aims to determine the effects of gender and parental perception of safety at school on children's physical activity (PA) levels.

Results. Analysis did not indicate that gender moderated the relationship between parental perception of safety and PA measures, but significant gender issues exist with girls participating less than boys in the three measures of PA in this study (p<0.001).

Approximately 3.2 million people die worldwide each year from a lack of physical activity.1 Physical inactivity in children is a challenging issue in Mexico as data on physical activity (PA) levels of all children in Mexico are sparse. The 2014 Mexican Report Card on Physical Activity for Mexican Children and Youth recently reported improvements in children's PA with physical inactivity in children (aged 10-18 years) declining from 40.4 % to 11.9%.2 More knowledge is needed concerning younger children. The same survey found that 58.6% of children aged 10-14 had not been active in any organized sports activities in the past year. Additional data are needed to evaluate children's levels of active play in the Mexican population.3

Gender plays a role in children's levels of PA. Jauregui13 found that Mexican boys participated an average of 143 minutes per day in MVPA while Mexican girls participated in an average of 98 minutes per day. Girls living in neighborhoods that are perceived as unsafe have been found to have higher levels of overweight and obesity.14 Carver and colleagues found that parental restriction of children's active transport and physical activity due to safety concerns resulted in lower levels of MVPA and active transport in adolescent girls.15 Further investigation is necessary to determine whether these relationships are related to parental restriction of PA based on gender.

This study focused on schools aged Mexican children because of their high risk for physical inactivity and underrepresentation in research. Data were collected on site in 20 schools in Mexico City, 12 schools in Guadalajara, and 8 schools in Puerto Vallarta. Jalisco State's Ministry of Education provided a referral of public schools or schools that were chosen by having participated in another study.16 School were located using the Mexican Schools directory.17

Parents of school aged Mexican children in grades 3rd to 5th residing in Guadalajara, Puerto Vallarta, and Mexico City completed paper and pencil surveys. Parental consent was obtained, and children provided assent. Approval for this study was obtained from the University of Houston Committee for the Protection of Human Subjects as well as the ethics institutional review boards of Queen's University, the Mexican National Institute of Public Health (Instituto Nacional de Salud Pública), and the University of Guadalajara. Paper and pencil surveys were sent home with children for parents to complete, and the children returned the completed surveys to the school. See table I for descriptive statistics. The survey included data on 817 boys and 924 girls. 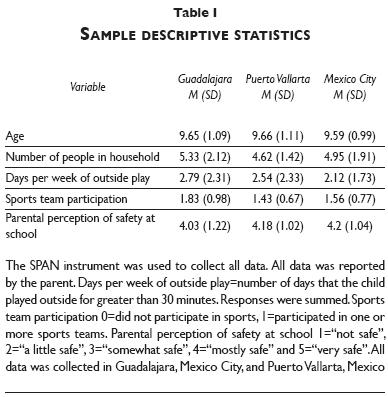 Analysis was based on questions drawn from the SPAN instrument, a parent survey that measured physical activity and demographic variables.18 Similar instruments have been tested and validated.19 Independent variables included child age, child gender, child grade level, number of people residing in the household, city of residence, and parental perception of child safety at school. Parental perception of safety at school was used to measure safety because of the likelihood that children attended school near their home. In Mexico, 66.4% of 10-14 year olds walk to school.2 Perception of safety at school serves as a proxy measure of neighborhood safety. Parents responded to the question "How safe does your child feel at school?" with "not safe", "a little safe", "somewhat safe", "mostly safe" and "very safe".

Three measures of physical activity were used for the dependent variables. Parents completed three questions on a self-reported questionnaire, which were scored according to established protocols.* The first indicator of PA asked parents how many days of the week the child played outside for 30 minutes or more. The number of days was summed for each respondent and recorded as a continuous variable. The second question asked how many sports teams the child had played on during the past 12 months. Responses included 0, 1, 2 or 3 or more sports teams. This variable was recoded as a binary variable. If the child had participated in one or more sports teams, it was coded as a yes, and as a no if the child had participated in 0 sports teams. The last question asked if the child currently participated in other organized physical activities or lessons in things like martial arts, dance, gymnastics, soccer, baseball, or tennis. Responses for this question were "yes" or "no".

Eighty-two percent of respondents (n=1591) reported that their child played for 30 minutes or more outside for one or more days of the week. Data indicated that 45.5% (n=704) of the respondents' children participated in sports teams. Thirty-nine percent (n=645) of respondents reported that their children participated in other organized PA such as dance lessons, martial arts, soccer, or gymnastics. See table II for frequencies.

Cases with missing gender data were examined for differences in the three indicators of PA. A one way anova showed significant differences in outside play between children in which gender was not specified and in children for which gender was specified (F=9.7, df=2, p<.001). Post hoc analysis using the Bonferroni criterion revealed a significant difference between children with gender not specified (M=2.8, SD=2.2) and girls (M=2.3, SD=2) p<.05 on the indicator of outdoor play. This relationship was not significant for boys (p=1.0). Results of a chi2 analysis showed significant association between gender (boys, girls, gender unspecified) and participation in sports, X2(2, N=1,642) =44.6, p<.001. A chi2 test was performed and a significant relationship was found between gender (boys, girls, gender unspecified) and participation in other organized physical activities X2(2, N=1, 764) =21.8, p<.001.

The results indicated that girls were less likely to participate in outside play than boys. Most of the data collected in Mexico on children's physical activity demonstrates that boys are more active than girls.2 This finding is of particular importance because it contributes to the small existing body of data concerning the influence of gender on PA levels among children in Mexico. Additional studies examining gender differences and the underlying causes for those variations in outdoor play would provide a valuable contribution to the science particularly in this population.

Our finding that girls were less likely than boys to participate in sports teams and other organized physical activity is consistent with one longitudinal study that also found boys were more likely than girls to participate in organized sports.22 While it is unclear why this gender gap exists in Mexico, research in the United States has indicated issues with less access to participation in sports for girls and a continued presence of social stigma against girls in sports.23 Future research should explore reasons for the gender gap in sports participation and organized physical activity in Mexico.

Sports participation among children in Mexico itself is limited with a reported 59% of Mexican children not participating in organized sports in the past 12 months.24 This was supported by the finding in the current study that 54.6% of children did not participate in sports teams. While there are many possible reasons for this, the structure of the schools operating in shifts has been suggested as a reason for the low numbers with the rationale that this school structure makes extracurricular PA not possible.25 The Mexican Report Card on Physical Activity for Mexican children and youth has identified creating larger numbers of extracurricular programs, building public spaces apt for safe sports, and encouraging participation in organized sports as recommendations for action.2 Additional research examining the cause for the lack of participation in organized sports is necessary.

Although it was not an aim of the study, variations in children's physical activity among cities were discovered. When compared to Guadalajara and Puerto Vallarta, Mexico City had lower measures outside play, however perception of safety at school was reported as higher in Mexico City. Guadalajara reported the highest levels of all three measures of physical activity. Future studies should examine environmental influences on physical activity in these areas to determine potential causes for variations, if any exist. Both Mexico City and Guadalajara participate in Ciclovia, an effort to reclaim public spaces for physical activity.26 It is important to note when considering perception of safety, that the Mexican government makes great efforts to protect visitors to tourist destinations in Mexico, and since Puerto Vallarta is widely considered a vacation destination for foreigners, this area may exhibit lower crime levels when compared to Mexico City and Guadalajara.27

Strengths of this study include a large sample size across multiple cities in Mexico. A limitation of the study was the measure of safety. Parental perception of safety was a question on the survey about safety at school. Perhaps if the question had examined another indicator of safety, perception of safety would have been a significant variable in more of the physical activity measures. An additional limitation of the study is the subjective measurement of physical activity with a questionnaire. PA levels could have been more objectively measured with accelerometers; however, they were beyond the scope of the resources available for this study.

These results are consistent with those of others suggesting that gender gaps exist in physical activity in Mexican children. We have established that gender is a significant contributor to children's PA levels, but it is important to understand the nature of that relationship so that interventions may be designed accordingly. Further research investigating the elements of safety and gender is necessary to increase physical activity levels in the understudied Mexican population.

This work made possible by a Fulbright-García Robles Core Scholar Fellowship awarded to Dr. Lee, the Canadian Institutes for Health Research and the Public Health Agency of Canada. This research was supported by funding from the National Institutes of Health/National Institute on Nursing Research (NIH/NINR), award T32 1T32NR012718-01 Transdisciplinary Training in Health Disparities Science (C. Keller, P.I.). The content is solely the responsibility of the authors and does not necessarily represent the official views of the NIH or the NINR.

15. Carver A, Timperio A, Hesketh K, Crawford D. Are children and adolescents less active if parents restrict their physical activity and transport due to perceived risk? Soc Sci Med 2010; 70;1799-1805.