In the last 60 years, there have been substantial advances regarding the diagnosis and treatment of patients with acute and chronic leukemia in Mexico. Immunologic and molecular classifications of these diseases have improved both diagnosis and therapeutic capabilities. Although the pace of diagnostic and therapeutic advances has been slower compared with developed countries, Mexico is at the forefront among developing countries. Supporting research in these fields is expected to enhance the generation of new knowledge and improve the care of patients suffering from these diseases.

When Eduardo Lazcano invited me to collaborate in the preparation of the book Cancer: Advances in diagnosis, treatment, prevention and control, edited by the National Institute of Public Health, I considered the convenience of presenting a document stating some of the unique characteristics of leukemia, both acute and chronic, in Mexico. After being involved in this field for more than 30 years and having participated in the diagnosis, treatment and follow-up of more than 1 200 patients with diverse types of leukemia in our country, I have been able to perform various observations of the disease that I will attempt to summarize in a concise way.

Immunologic classification of acute leukemia has been conducted in Mexico since 1983. Prior to 1983 and beginning in 1953, the diagnosis and classification of leukemia were merely supported by morphologic criteria. This change has led to a significant improvement in the prognosis of patients with leukemia in Mexico.11. Ruiz-Argüelles GJ, Marín-López A, Ruiz-Argüelles A. Immunologic classification of the acute non-granular leukemias in the city of Puebla, México; Its value in the diagnosis and prognosis. Rev Invest Clin 1987;39:143-147.,22. Ruiz-Argüelles GJ, Marín-López A, Ruiz-Argüelles A, Valls-de-Ruiz M. Estudio prospectivo de la clasificación inmunológica de 128 casos de leucemia aguda linfoblástica en la ciudad de Puebla, México. Rev Invest Clin 1987; 39:137-142. Since 1994, implementation of ALL molecular markers such as BCR/ABL, TEL/AML1, FLT3, NPM-1 chimeric genes and mutations in IKAROS, which are widely and routinely used in Mexico, has allowed a better classification, selection and treatment follow-up of these leukemias.33. Ruiz-Argüelles GJ, Garcés-Eisele J, Ruiz-Argüelles A. Molecular follow-up of patients with promyelocytic leukaemia treated with all trans-retinoic acid. Clin Lab Haematol 1998; 20:173-176. However, nutritional aspects of patients are critical in our environment; malnourished children with ALL have a worse evolution than well-nourished children. These observations, initially performed in Mexico,44. Lobato-Mendizábal E, Ruiz-Arguelles GJ, Marín-López A. Leukaemia and nutrition I: Malnutrition is an adverse prognostic factor in the outcome of treatment of patients with standard risk acute lymphoblastic leukaemia. Leuk Res 1989;13:899-906. have been corroborated in other developing countries where it has been found that nutritional status is associated with the socioeconomic condition of patients and adherence to treatment, among other variables.55. Viana MB, Fernandes RA, de Oliveira BM, Murao M, de Andrade Paes C, Duarte AA. Nutritional and socio-economic status in the prognosis of childhood acute lymphoblastic leukemia. Haematologica 2001; 86(2):113-120.

Combined highly aggressive polychemotherapy treatment schemes for ALL - type HyperCVAD - are associated with higher morbimortality in treated patients. In Mexico, outcomes obtained with less aggressive and complex schemes are as efficient as other approaches but are associated with lower morbimortality.66. Ruiz-Delgado GJ, Macías-Gallardo J, Lutz-Presno J, Montes-Montiel M, Ruiz-Argüelles GJ. Outcome of adults with acute lymphoblastic leukemia treated with a pediatric-inspired therapy: A single institution experience. Leukemia Lymph 2011; 52:314-316. In addition, these schemes can be administered on an outpatient basis and are associated with better quality of life for the treated patient. For high-risk or relapsing patients with ALL, bone marrow transplantation (BMT) performed with reduced-strength schemes and on an outpatient basis is associated with favorable outcomes that are better than those obtained with combined chemotherapy.77. Gutiérrez-Aguirre CH, Gómez-Almaguer D, Cantú-Rodríguez OG, González-Llano O, Jaime-Pérez JC, Herena-Pérez S, et al. Non-myeloablative stem cell transplantation in patients with relapsed acute lymphoblastic leukemia: Results of a multicenter study. Bone Marrow Transplant 2007; 40:535-539. Introduction of tyrosine kinase inhibitors (TKIs) for treatment in patients with ALL and the Philadelphia chromosome has dramatically improved their prognosis.88. Gutiérrez-Aguirre H, García-Rodríguez F, Cantú-Rodríguez O, González-Llano O, Jaime-Pérez J, Gómez-Almaguer D. Effectiveness of dasatinib in relapsed CNS, Ph+ ALL that is refractory to radiochemotherapy plus imatinib: a case report. Clin Adv Hematol Oncol 2011;11:875-878. New drugs for the treatment of patients with ALL, such as clofarabine and blinatumomab, have been used rarely in Mexico due to their high costs.

The cumulative experience regarding allogeneic BMT2525. Ruiz-Delgado GJ, Ruiz-Argüelles GJ. A Mexican way to cope with stem cell transplantation. Hematology 2012;17(Suppl 1):195-197. over the last 20 years has led to the discovery of numerous DCL characteristics, which were considered unusual in the past but are now recognized as having been under-estimated with respect to their prevalence.2626. Ruiz-Argüelles GJ, Ruiz-Delgado GJ, Garcés-Eisele J, Ruiz-Argüelles A, Pérez-Romano B, Reyes-Núñez V. Donor cell leukemia after non-myeloablative allogeneic stem cell transplantation: A single institution experience. Leuk Lymphoma 2006;47:1952-1955.

In Mexico, the distribution of leukemic types and subtypes is different compared with other countries. The implementation of novel technologies such as flow cytometry and molecular biology in the last three decades has allowed the discovery of details regarding acute and chronic leukemia in Mexico (figure 1). Leukemia treatments have been adapted to economic conditions in Mexico and have occasionally served as the basis of treatments in other developing countries. Studies conducted in Mexico on these diseases have been confirmatory but have also generated new knowledge (table I). 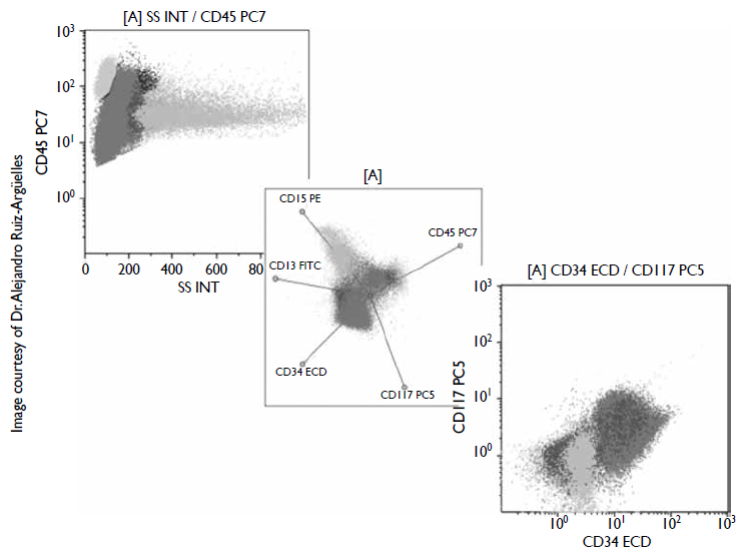 Table I   Chronology of several advances in the diagnosis and treatment of acute and chronic leukemia, emphasizing events that occurred in Mexico 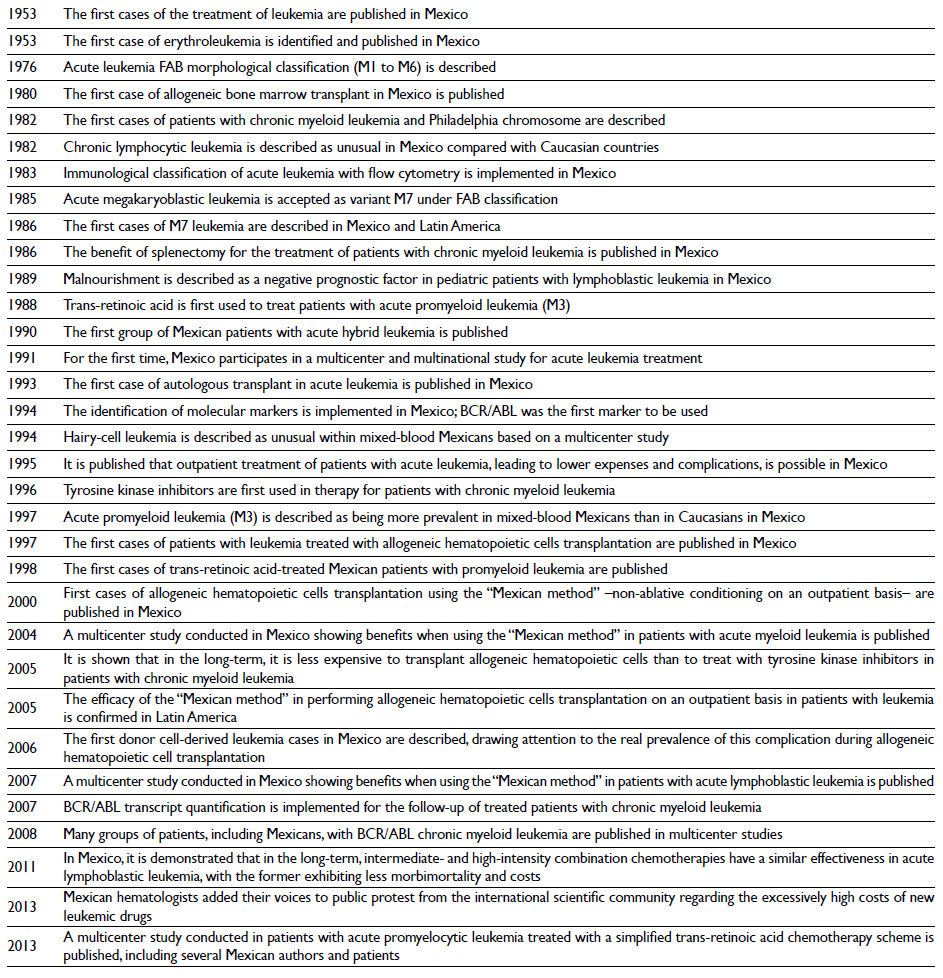