952 incident cases with histologically confirmed BC were matched by age (± 5 years) and zone of residence with 998 healthy population controls. Genetic variants in genes CYP1A1, CYP1B1, GSTM1 and GSTT1were genotyped by allelic discrimination and multiplex PCR. In a subsample of women, 105 markers for ancestry were determined.

Our results support the existence of genetic susceptibility for BC conferred by CYP1B1 G119T variant among Mexican women.

Globally, breast cancer (BC) is a major growing health problem with an important worldwide variation. In Mexico it is the leading cause of female cancer with around 20000 new cases per year.11. Bray F, Piñeros M. Cancer patterns, trends and projections in Latin America and the Caribbean: a global context. Salud Publica Mex. 2016;58:104-17. https://doi.org/10.21149/spm.v58i2.7779
https://doi.org/10.21149/spm.v58i2.7779... Age at BC diagnosis differs significantly between less developed countries, where 47.37% of new BC cases occur before 50 years of age, and developed countries, where only 18.5% of new cases occur before such age.22. Ghiasvand R, Adami HO, Harirchi I, Akrami R, Zendehdel K. Higher incidence of premenopausal breast cancer in less developed countries; myth or truth? BMC Cancer. 2014;14(1):343. https://doi.org/10.1186/1471-2407-14-343
https://doi.org/10.1186/1471-2407-14-343... The lower BC incidence and younger age at onset in developing countries may be partially explained by the scarcity of BC screening programs and cancer registries in them and by the fact that these countries have a much younger population than developed ones. However, these differences across countries may also be the result of differences in exposure to environmental, reproductive and genetic BC risk factors.

Variants in cytochrome P450 1A1 (CYP1A1) and 1B1 (CYP1B1) as well as the glutathione S-transferase mu1 (GSTM1), theta1 (GSTT1) and pi1 (GSTP1), all of which codify enzymes that are involved in detoxification pathways via C-or N-hydroxylation as well as in estrogen metabolism, may be related to BC susceptibility, yet scarce information is available.33. Williams JA, Phillips DH. Mammary expression of xenobiotic metabolizing enzymes and their potential role in breast cancer role in breast cancer 1. Cancer Res. 2000;60:4667-77.

This is a secondary report from a case-control study, conducted between 2007 and 2011 in five Northern States of Mexico (Sonora, Chihuahua, Coahuila, Nuevo León and Durango) to identify the environmental and genetic risk factors for BC in that area. Detailed information about the study design and recruitment methods is available elsewhere.44. López-Carrillo L, Hernández-Ramírez RU, Gandolfi AJ, Ornelas-Aguirre JM, Torres-Sánchez L, Cebrian ME. Arsenic methylation capacity is associated with breast cancer in northern Mexico. Toxicol Appl Pharmacol. 2014;280(1):53-9. https://doi.org/10.1016/j.taap.2014.07.013
https://doi.org/10.1016/j.taap.2014.07.0...

After signing the informed consent, cases were interviewed at the hospital before receiving any specific treatment (hormonal therapy, chemotherapy and/or radiotherapy), while controls were interviewed at their homes. Information on medical and reproductive history, sociodemographic characteristics and tobacco and alcohol consumption was obtained through face-to-face interviews. Anthropometric measurements (height and weight), as well as a blood sample (10 ml), were obtained from each woman. Incentives were given in the form of grocery vouchers, to increase the response rate. The response rate among cases was 96.4% (n=1 045/1 084) and 99.9% (n=1 030/1 031) among controls. The main reason for not participating in the study was lack of interest. This study was approved by the Ethics Committee of Mexico’s National Institute of Public Health.

Buffy coat was obtained from blood samples from which DNA was extracted with the Quick-gDNAMidiPrep kit (Zymo Research). Spectrophotometry was used to quantify and determine DNA purity at 260/280 nm and 260/230 nm wavelengths. DNA samples with a ratio of 1.7 to 1.9 and 2.0 to 2.2, respectively, were considered as acceptable.55. Thermo Fisher Scientific. NanoDrop Spectrophotometers. Assessment of Nucleic Acid Purity [Internet]. Wilmington, Delaware: Thermo Fisher Scientific Inc, 2012 [cited september 3, 2016]. Available from: Available from: http://www.nanodrop.com/Library/T042-NanoDrop-Spectrophotometers-Nucleic-Acid-Purity-Ratios.pdf
http://www.nanodrop.com/Library/T042-Nan... DNA integrity was visually assessed (2% agarose gels stained with ethidium bromide) in a 10% randomly chosen sample. One hundred twenty-five (31 controls and 94 cases) of the 2075 available DNA samples were not considered acceptable, yielding 952 cases and 998 controls for further analysis.

SNP variants in CYP1A1 and CYP1B1

Indel variants in GSTM1 and GSTT1

Indel variants in GSTM1 and GSTT1 were identified by Multiplex PCR with the following conditions: enzyme activation at 95°C for 15 minutes, amplification for 40 cycles at 95°C for 30 seconds, alignment at 59°C for 35 seconds and 72°C for 60 seconds, followed by an extension of 10 minutes at 72°C. Two sets of primers were used to amplify segments of 215 pb in GSTM1 and 480 pb in GSTT1.66. Xiong P, Bondy ML, Li D, Xiong P, Bondy ML, Li D, et al. Sensitivity to Benzo(a)pyrene Diol-Epoxide associated with risk of breast cancer in young women and modulation by Glutathione S-Transferase Polymorphisms: A case-control study. Cancer Res . 2001;61:8465-9. The reaction mixture was prepared in a final volume of 25 µl (1x) including: 20 ng/µl genomic DNA, 0.13 µl HotStarTaq polymerase (QIAGEN, INC.), 0.2 µl GSTM1 primer, 0.1 µl GSTT1 primer, 0.6 µl dNTPs and 0.2 µl DHFR (dihydrofolate reductase) as positive control. In addition, a mixture without DNA was assessed as negative control. A molecular weight marker from 100 to 3 000 pb was used (DNA Ladder, Qiagen). Genotyping was carried out by visual inspection in 10µl of amplified product by electrophoresis in agarose gels (2%). Twenty-five samples from cases and 43 samples from controls did not amplify; therefore, the final sample size for further analysis was: 927 cases and 955 controls.

Association between BC and each genetic variant of interest was evaluated using an unconditional logistic regression model with adjustment for age (20-24, 25-29, …. years), years of schooling, first degree relative with BC (yes, no), age at first full term pregnancy (<21, 21-24, ≥25 years, nulliparous), breastfeeding at first birth (no/nulliparous, 1-6, 7-12, >12 months), consumption of alcohol (yes, no) and tobacco (yes, no). CYPs genotypes were evaluated according to the dominant, recessive and co-dominant models. However, only those from the co-dominant model are shown in detail, since results for the other two models were similar. On a subsample of 656 cases and 611 controls, a sensitivity analysis to assess ancestry as a potential confounder was performed. Statistical analyses were conducted with Stata software, version 13 (Stata Corp., College Station, TX, USA).

Due to the study design, there were no significant differences between cases and controls regarding age (approximately 54 years) and place of residence. Compared to controls, BC cases had a significantly higher educational level (8.2 vs. 5.9 years of schooling, respectively, p=<0.01) (data not included in table I). BC risk was significantly increased by nulliparity, older age at first full pregnancy, first-degree family BC history, and alcohol and tobacco consumption. In contrast, breastfeeding of first child and body mass index among pre-menopausal women were inversely associated with BC (table I).

Thumbnail
Table I
Association between breast cancer and reproductive and lifestyle risk factors in the study population. Northern Mexico, 2007-2011

Some methodological considerations should be taken into account to interpret our results. The genotype distributions of interest did not deviate from the expected values; which implies that our study population was not genetically atypical. It has been suggested that, within the Hispanic population, BC risk may differ depending on the amount of the European vs. American Indian genetic heritage. Therefore, a panel of 105 ancestry markers was determined in a subsample of 1 267 women. The analysis of this subsample showed that ancestry did not confound the results for most of the variants of interest; however, it did not help us to determine this situation, for CYP1B1 G119T variant that was not in Hardy-Weinberg equilibrium (table III). All laboratory personnel were blinded to case-control status, to reduce the likelihood of differential error; however, we cannot rule out that our estimates may be underestimated, due to non-differential errors resulting from the less than total sensitivity and specificity of the laboratory techniques.

We are deeply indebted to the women who participated in the study; to Verónica López for her coordination of the fieldwork; to Reina Collado for her administrative support; to Dr. José Moreno for providing laboratory facilities; to BSc. Tulia Monje for her laboratory technical support; to Dr. Elad Ziv for providing ancestry information. This study was supported by CONACyT. Fondo Sectorial de Investigación en Salud y Seguridad Social (2005-2-14373, 2009-1-111384 and 2010-1-140962).

Table I   Association between breast cancer and reproductive and lifestyle risk factors in the study population. Northern Mexico, 2007-2011 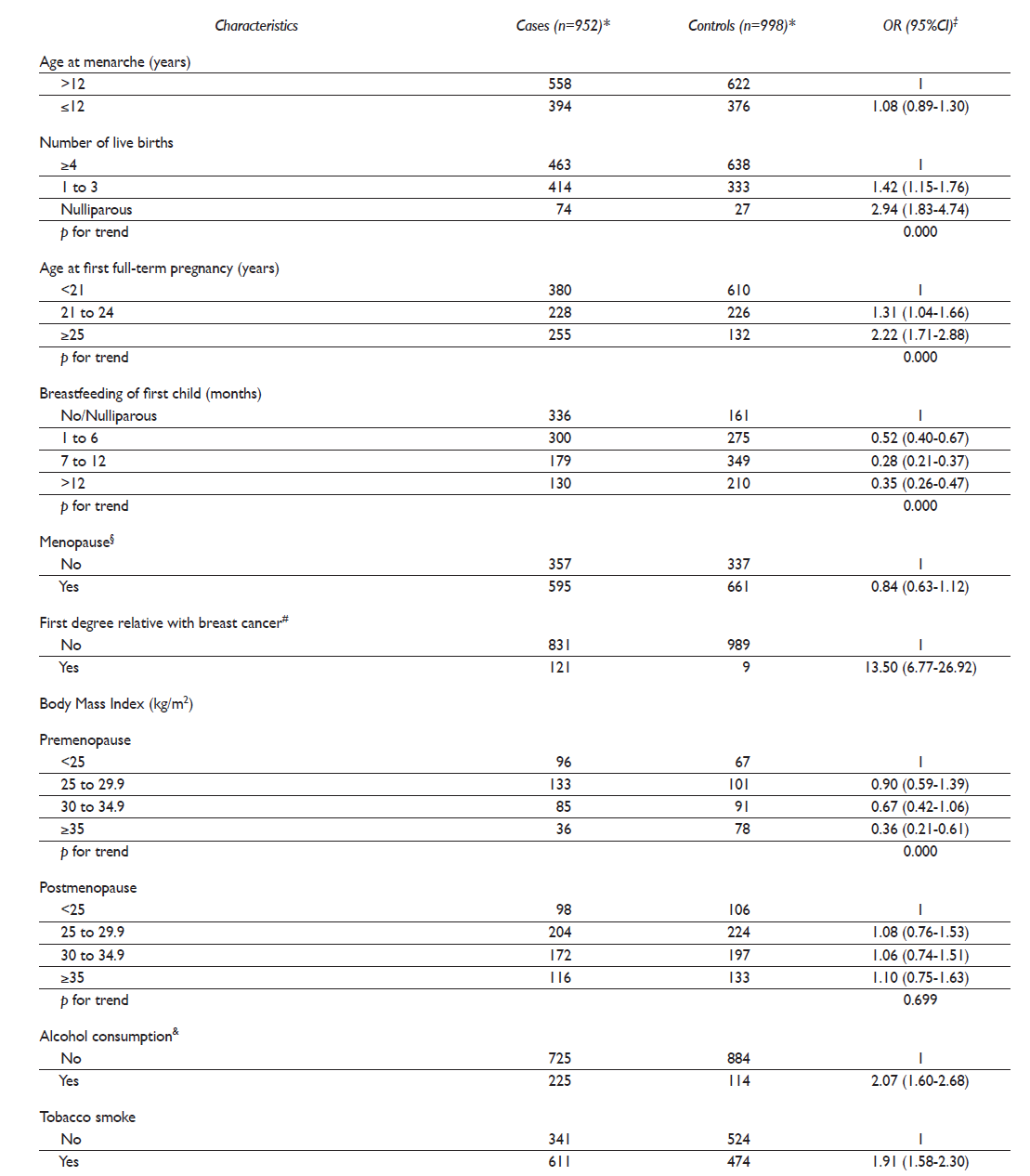 Table III   Breast cancer risk according to the genetic variants in a subsample of 1267 women: ancestry sensitivity analysis. Northern Mexico, 2007-2011