In Mexico, anogenital HPV infection in men is high and can cause condyloma. Estimation of EGL magnitude and associated healthcare costs is necessary to assess the need for male anti-HPV vaccination.

All participants signed an informed consent form. The study protocol was approved by the research, ethics and biosafety committees of the National Institute of Public Health of Mexico.

Sample collection of the genital Surface for HPV detection

During each visit, men had an anogenital examination under a 3x lamp by a trained physician, supervised by a urologist, to detect the presence of EGLs. A tissue sample of each lesion was obtained by tangential excision. All EGLs that appeared to be related to HPV or were of unknown etiology based on visual inspection were tested for HPV and underwent histological confirmation by pathology. EGLs were classified as condyloma, suggestive of condyloma, penile intraepithelial neoplasia (PeIN), or unassociated with HPV, based on criteria described previously.1616. Anic GM, Messina JL, Stoler MH, Rollison DE, Stockwell H, Villa LL, et al. Concordance of human papillomavirus types detected on the surface and in the tissue of genital lesions in men. J Med Virol. 2013;85(9):1561-6. https://doi.org/10.1002/jmv.23635
https://doi.org/10.1002/jmv.23635... PeIN lesions were further classified as PeIN I (low grade squamous intraepithelial lesion [SIL]), PeIN II, PeIN II/III, and PeIN III (all high grade SIL). Pathological diagnoses of EGL “suggestive of condyloma” and “condyloma” were grouped together for analysis, since the former share at least two and as many as four pathological characteristics of condyloma.

Men with a prevalent lesion were excluded from this analysis. We did descriptive analysis of the demographic characteristics and sexual practices of all males in the cohort, whether or not they developed EGL during the follow-up. A specific analysis by age was performed for men who developed incident EGL within this cohort, stratified by age groups as follows: 18 to 30, 31 to 44, and 45 to 74 years.

Only the first EGL developed was included in EGL incidence analyses. Incidence was calculated from the beginning of the biopsy cohort until the date when the first EGL was detected. Person-time incidence was calculated, and 95% confidence intervals were based on the number of occurrences modeled as a Poisson variable for the total number of person-months. Kaplan-Meier curves were generated for the incidence of EGL, and EGL incidence was compared over time in all three age groups using the log-rank test. Cumulative incidence of development of an EGL was also estimated in the first 12 months of follow-up using the Kaplan-Meier method.

Progression of HPV infection to EGL

Among men (without prevalent condyloma or PeIN) with an incident or prevalent genital HPV infection, the rate and proportion of men progressing to an EGL was estimated. Demographic characteristics were compared among men who developed or failed to develop an EGL using Monte Carlo estimates of exact Pearson’s chi-square test. HPV infection was described by genotype or group (any, HR-HPV, LR-HPV). Classification as any HPV type was defined as a positive test result for at least one of the 25 HPV genotypes (HPV types 43/44/74 are not detected through Linear Array Assay) using INNO-LiPA. HPV infections by a single or multiple HR-HPV types were classified as high-risk and infections by at least one of the LR-HPV types were classified as low-risk.

Thumbnail
Table I
Differences in sociodemographic characteristics and sexual behavior among Mexican men with and without an incident EGL during follow-up
Thumbnail
Table II.
Age-specific incidence of pathologically confirmed external genital lesions (EGLs) among Mexican men in the HIS Study
Thumbnail
Figure 1
Kaplan-Meier curves showing differences in cumulative incidence of external genital lesions (EGLs) by age group, Mexican men in the HIS Study

Progression of HPV infection to EGL

Among the 954 men with at least two follow-up visits, 519 had a prevalent or incident HPV infection. In thirty-three of these men HPV progressed to a lesion with the same HPV type detected within the lesion (table III). There were no statistically significant differences between HPV-positive men who did and did not develop an EGL. Correspondingly, 31.2% of HPV6 infections progressed to HPV6-positive condyloma and 28.6% of HPV11 infections progressed to HPV11-positive condyloma (table III). In addition, the median time for progression of an infection with any type of HPV to condyloma (with DNA for that same type of HPV detected in the lesion) was 8.7 person-months. Progression from an infection with a HR-HPV type took a median time of 7.6 person-months while progression from LR-HPV types took a median time of 10.8 person-months (table IV).

Thumbnail
Table VI.
Incidence of penile intraepithelial neoplasia (PeIN)* by human papillomavirus (HPV) type detected in the lesion‡ with the same HPV type detected on the genitals§among Mexican men in the HIM Study

This is one of the first reports on incidence of EGLs in Mexico, as well as the frequency of PeIN. This is particularly significant, since no specific information is available on the Mexican and Latin American context regarding the burden of condyloma, or cancer precursor lesions of the penis (PeIN).

Our study in a population of healthy Mexican males indicates that anogenital HPV infection is endemic, that infection with HPV6 and 11 is high, and that these infections progress to condyloma at a high rate. In addition, along with high-risk HPV types such as type 16, these infections are the main determining factor for penile cancer and precursor lesions. The proportion of subjects with HPV types that progress to low and high grade PeIN is relatively low, yet it is relevant, since it is a precursor to penile cancer.

The burden of condyloma has been quantified mainly in higher-income countries, where sexually transmitted infections are considered a public health problem given the scientific evidence showing their high incidence and high healthcare costs.2828. Coles VA, Chapman R, Lanitis T, Carroll SM. The costs of managing genital warts in the UK by devolved nation: England, Scotland, Wales and Northern Ireland. Int J STD AIDS. 2016;27(1):51-7. https://doi.org/10.1177/0956462415573121
https://doi.org/10.1177/0956462415573121... In many areas, introduction of anti-HPV vaccination for males could be especially beneficial to men who have sex with men.2929. King EM, Gilson R, Beddows S, Soldan K, Panwar K, Young C, et al. Human papillomavirus DNA in men who have sex with men: type-specific prevalence, risk factors and implications for vaccination strategies. Br J Cancer. 2015;112(9):1585-93. https://doi.org/10.1038/bjc.2015.90
https://doi.org/10.1038/bjc.2015.90... However, other than the HIS Study, there are no sizeable longitudinal studies that assess the natural history of condyloma in middle- and low-income countries. As a result of this lack of scientific evidence, this public health problem is underestimated and therefore also the possible benefits of vaccination among men.

In the Mexican National Health System, most condyloma are treated in primary healthcare centers with medication.3030. Jiménez-Vieyra CR. Prevalence of condyloma acuminata in women who went to opportune detection of cervicouterine cancer. Ginecol Obstet Mex. 2010;78(2):99-102. Recurrent lesions are referred for surgical removal, diathermia, cryotherapy or laser treatment, or to gynecology, urology and/or dermatology units. However, in this healthcare system there are no specialized clinics for sexually transmitted infections except those to diagnose, treat and follow up individuals with HIV. Consequently, in Mexico, and most likely in the Latin American region in general, it is imperative that the number of medical visits for condyloma be quantified to estimate related healthcare costs.

A potential limitation of the study is that the findings are not necessarily generalizable to all men in Mexico. As HPV incidence was based on clinic visits, which occurred every six-months, this might not reflect the exact timing of infection.

The HIS Study infrastructure is supported by the US National Cancer Institute, National Institutes of Health [R01 CA098803 to A.R.G.] and the National Institute of Public Health from Mexico. Likewise, Merck provided financial support for the data analysis. 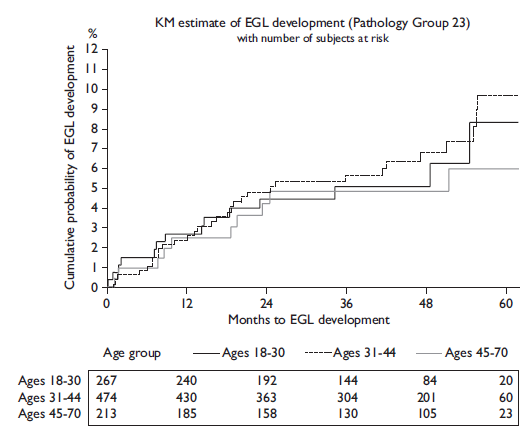 Figure 2   Kaplan-Meier (KM) curves showing differences in cumulative incidence of combined condyloma progression of HPV to condyloma by HPV type, Mexican men in the HIS Study 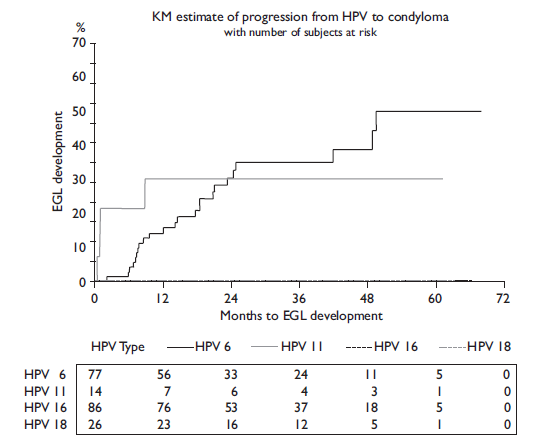 Table V.   Incidence of condyloma *by human papillomavirus (HPV) type detected in the lesion‡ among Mexican men with the same HPV type detected on the genitals,§ HIS Study

Table VI.   Incidence of penile intraepithelial neoplasia (PeIN)* by human papillomavirus (HPV) type detected in the lesion‡ with the same HPV type detected on the genitals§among Mexican men in the HIM Study