Evidence-based medicine: what it can and cannot do

Evidence-based medicine (EBM) is not a old hat, a "cookbook" medicine perpetrated by arrogant to serve cost cutters to suppress clinical freedom, a mandatory, deterministic, totalitarian practice of medicine, a way to control cost and to ignore patient preferences, a limit to personal/humanistic/individual medicine. EBM is a reference of excellence to guide clinical decisions, the integration of own expertise with others' expertise and patient preferences, a way to improve medical practice and limit the variability and errors created when there is not evidence to identify the gold standard and differentiate among alternatives available. But evidences need to be integrated with a new thinking based on Complexity Science. Health care systems operates as complex adaptative systems rather than rigid, linear or mechanical organizations and innovation is a critical outcome of Complexity Science. How does EBM impact drug innovation? New drug approvals are not keeping pace with rising Research and Development spending, clinical approval success rate for new chemical entities (NCEs) is progressively dropping and maybe, through these indicators, we are seeing the worst face of EBM: its limiting, blocking, and controlling side. If that is the case, EBM is the main ally to keep the economy of health systems under control and the great excuse to block the access of the innovation to patients. Certainly not the best way to maximize the benefits of EBM.

Philosophical origins of evidence-based medicine (EBM) extend back to 19th century and earlier but EBM still remains a hot topic for clinicians, public health practitioners, purchasers, planners, and the public as well.

According to David Sackett's definition [1], EBM is the "conscientious, explicit, and judicious use of current best evidence in making decisions about the care of individual patients".

Such a needed integration also comes from the multifaceted concept of evidence (proof, causality but uncertainty as well) where every component has its own implication in terms of clinical decisions.

However, as suggested by the philosopher John Mackie [2], causality cannot be reduced to single necessary and sufficient causes; rather it should be described in terms of a complexity of elements he calls INUS (Insufficient Non-redundant component of an Unnecessary Sufficient complex). None of them is a single sufficient cause but only their conjunction gives origin to an overall sufficient complex and at least one is necessary (non-redundant), i.e., in its absence the complex would be ineffective.

EVIDENCE-BASED MEDICINE IN THE 21ST CENTURY

This said, is evidence, and particularly EBM, the necessary, non-redundant component for good clinical decisions? Paradoxically, in the early 21st century we still need to clarify what EBM is and what is not.

The reason is that EBM has strong supporters but is not without its critics. As a matter of fact, supporters have traditionally envisioned EBM as a way to "close the gulf between good clinical research and clinical practice" [3] but critics argue that this gulf can never be completely closed because it represents an intrinsic, philosophical gap.

Moreover, population-based studies are likely to fulfill the goal of public health, but the application of the same knowledge to the individual is problematic.

In addition, focusing primarily on the results of clinical trials, minimizes the importance of intangible physical, emotional, and spiritual aspects of illness.

Furthermore, all evidence is not equally good (e.g., studies' design, sample sizes, statistical significance) and evidence can be contradictory.

Finally, EBM also has its "internal" enemies: the "enthusiasts". As pointed out by Dave Holmes, "The evidence-based movement is outrageously exclusionary and dangerously normative...and constitutes a good example of micro-fascism at play in the contemporary arena"[4].

According to our point of view, EBM is not:

- a "cookbook" medicine perpetrated by arrogant to serve cost cutters to suppress clinical freedom (because it is restricted to randomized trials and meta-analyses);

- a block/ban/barrier for not doing something when evidences do not exist;

- a way to control cost and to ignore patient preferences;

- a limit to personal/humanistic/individual medicine.

On the other hand, we would apply EBM as:

- a reference of excellence to guide clinical decisions;

- the integration of own expertise with others' expertise and patient preferences;

- a way to improve medical practice and limit the variability and errors created when there is not evidences;

- a way to identify the gold standard and differentiate among different alternatives available;

- a valid approach for medical interventions.

Having emphasized the positive aspects of EBM, we strongly need to stress that evidences alone are not enough and, to demonstrate that, we will use a parallel between EBM and modern management.

As pointed out by Gareth Morgan, "one of the most basic problems in modern management is that the mechanical way of thinking is so grained in our every day conception of organization that it is often very difficult to organize in any other way".

Current management thinking largely assumes that a well functioning organization is akin to a well oiled machine. This leads to the notion that performance is optimized when work is specified in detail and shared out to distinct operational units.

Conventional models are based on the Newtonian scientific principles which hold that by understanding simple universal rules that control the system parts, future behaviour of the parts is predictable with linear cause and effects.

The limits of Newtonian reductionism which has guided scientific thinking for over three centuries are astonishing if we start to consider management (but healthcare decision-making as well?) in terms of Complexity Science.

Complexity Science is a direct challenge to the dominance of the machine metaphor. It is a description of the complex phenomena demonstrated in systems characterized by non linear interactive components, emergent phenomena, continuous and discontinuous change and unpredictable outcomes. Complexity, typical of living systems, is usually understood in contrast to simple, linear systems (Table 1). 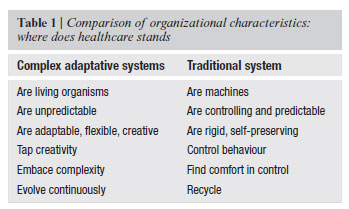 We do believe that every stakeholder charged with making decisions about the care of individual patients should work with, rather than against, overwhelming complexity. This means making sense of a complex world, rather than providing neat answers - when not absolutely certain - that promise success.

Health care systems operates as complex adaptative systems rather than rigid, linear, or mechanical organizations. Critical components of the first ones are creativity and innovation, whereas the second ones use mainly control and predictability. Perhaps a good balance between both concepts really aggregates value to the provision of care, as both approaches are needed to achieve excellence.

Innovation and creation of new solutions are critical outcomes of Complexity Science, whereas EBM will help to apply innovation into clinical practice in a systematic way and improve therefore the provision of care.

Why should healthcare executives be interested in Complexity Science? For two inter-related reasons: the frustration with some of the traditional clinical and organizational interventions in healthcare and because Complexity Science resonates with or articulates what they were already doing. It provides the language and models to explain their intuitive actions.

IMPACT OF EBM ON INNOVATION

A final, open question on possible limits of EBM refers to how EBM impact on innovation. According to Regina E. Herzlinger [5], there are six forces that can drive innovation or kill it:

-players: the friends and foes lurking in the health care system that can destroy or bolster an innovation's chance of success;

-funding: the processes for generating revenue and acquiring capital, both of which differ from those in most other industries;

-policy: the regulations that pervade the industry, because incompetent or fraudulent suppliers can do irreversible human damage;

-technology: the foundation for advances in treatment and for innovations that can make health care delivery more efficient and convenient;

-customers: the increasingly engaged consumers of health care, for whom the passive term "patient" seems outdated;

-accountability: the demand from vigilant consumers and cost-pressured payers that innovative health care products be not only safe and effective but also cost-effective relative to competing products.

Apparently, none of them is strictly linked to EBM but the concept of accountability calls for a more in-depth analysis. To this purpose, let's consider how EBM specifically impacts on drug innovation.

New drug approvals are not keeping pace with rising R&D spending, overall clinical approval success rate for NCEs is progressively dropping and tailored, personalized medicine seems to be the right direction for the future: how EBM rigorousness can combine with progressive uncertainties of R&D outcomes? What is the right balance between the lengthy search for "conscientious, explicit, and judicious use of current best evidence in making healthcare decisions" and the urgency of individual/collective patients' demand for unmet medical needs which could be properly addressed by innovative treatment?

Last drops in terms of new drugs applications and approvals are sending us dramatic signals.

Perhaps there are physiological reasons for such a decrease in R&D productivity: genomics and other new sciences did not reach full potential yet, mergers and other business arrangements have decreased candidates taken forward, costs are rapidly escalating (the average cost of bringing a new product to the market now exceeds 1 billion Euro), attrition rates are increasing (higher percentage in clinical development), investments in basic biomedical science has far surpassed investment and progress in the medical product development process (a serious bottleneck to delivery of new products).

Furthermore, the disappointing performance of the R&D productivity cannot be fully explained by sector-specific factors. It seems to be also the consequence of a lack of dynamism in introducing horizontal reforms aimed at improving the overall business environment as well as reforming its labour and capital markets, education systems, public spending and regime of market regulation.

This holistic vision seems to be linked to the theory of the so-called ecosystem of innovation, that is to say that innovation is often the result of the interaction among an ecology of actors (Figure 1).

But maybe, through these indicators, we are seeing the worst face of EBM: its limiting, blocking, and controlling side. Perhaps also we are seeing a growing unbalance between those with the responsibility of creating innovation and provide care, vs. those with the responsibility of sustain economically the Health Care System. If that is the case, EBM is the main ally to keep the economy of health systems under control and the great excuse to block the access of the innovation to patients. Certainly not the best way to maximize the benefits of EBM.

In other words, could EBM hamper rather than foster pharmaceutical innovation?

It's not easy to give an answer to this final question but we do certainly agree with Stuart Kauffman from Santa Fe Institute when he puts the finger on the right balance and says that "to survive in a variable environment, a living system must be stable to be sure, but not so stable that it remains for ever static" [6].

There are no potential conflicts of interest or any financial or personal relationships with other people or organization that could inappropriately bias this contribution.

5. Herzlinger RE. Why innovation in health care is so hard. Harv Bus Rev 2006;84(5):58-66. Available from: http://hbr.org/hbr-main/resources/pdfs/comm/philips/innovation-health-care-hard.pdf.

6. S. Kauffman. At home in the universe: the search for the laws of self-organization and complexity. New York, Oxford: Oxford University Press; 1995.

SciELO Analytics
Dimensions
Evidence-based medicine: what it can and cannot do
PlumX