Objective. To describe risk factors associated to the incidence of type 2 diabetes (T2D) in Mexican population and to define phenotypic (clinical, anthropometric, metabolic) characteristics present in the individual who will convert to diabetes, regardless of time of onset.

Materials and methods. The Mexico City Diabetes Study began in 1990, with 2 282 participants, and had three subsequent phases: 1994, 1998, and 2008. A systematic evaluation with an oral glucose tolerance test was performed in each phase. For diagnosis of T2D, American Diabetes Association criteria were used.

Conclusion. The phenotype described represents a potentially identifiable phase and a target for preventive intervention.

The epidemic of type 2 diabetes (T2D) continues its relentless incremental growth, afflicting more than 550 million people all over the globe.1,2 Some regions are considered the epicenter of this unprecedented phenomenon, particularly China and India.3,4 It is recognized that a complex interaction of genetic and environmental factors are key elements of the driving forces behind this enormous challenge.5,6 Substantial evidence is available to suggest that at least 30% of the excess in the prevalence of T2D is the result of influences by environmental determinants; this estimate has been previously documented in Mexican origin population.7 Moreover, a new light has been shed on this complex phenomenon, as a result of the recent identification of a gene, previously unrecognized as an associated genetic signal in Mexican origin population.8 This gene, SLC16A11, with functions still insufficiently studied, could explain about 28% of the excess of T2D seen in Mexican origin population.

It is reasonable to consider that the growth of the T2D epidemic might be the result of the interaction between genetic predisposition and a high risk environment.9 The epidemic of T2D is a major cause of mortality and morbidity, its care and complications represent already an enormous and growing health problem of the highest priority.10 The prevalence of obesity and impaired glucose tolerance11,12 was reported already high more than 20 years ago in Mexico. Predictably these determinants have increased and fueled the growth of the T2D epidemic. Since there are several determinants inherent to each particular environment/population interaction, it is potentially useful to identify those risk factors playing the most significant role in any given time and circumstances. Hereby we present an analysis of the risk factors associated with the long term incidence of T2D in Mexican population and describe phenotypic characteristics amenable for preventive intervention.

The Mexico City Diabetes Study (MCDS) is a population-based, prospective research designed to characterize the prevalence, incidence and natural history of T2D and cardiovascular risk factors, in low-income urban inhabitants of Mexico City. Methods have been previously described.13 The baseline phase started in 1990 with 2282 men and non-pregnant women (35 to 64 years of age). There has been three subsequent phases with similar study protocols (1994, 1998 and 2008). This research was approved by the Institutional Review Board of the Instituto Nacional de Salud Pública and the Centro de Estudios en Diabetes. Informed consent was obtained from the participating subjects, in accordance with the ethical principles for medical research involving human subjects.

Those individuals who reported that they had a previous diagnosis of T2D by a physician and were receiving pharmacological treatment for diabetes were considered to have T2D regardless of their blood glucose values. For subjects not known to be diabetic, we used the American Diabetes Association (ADA) diagnostic criteria (fasting glucose ≥126 mg/dl, or two-hour plasma glucose ≥200mg/dl after a standard, 75g oral glucose load).14 We accepted T2D diagnosis if it was stated in the death certificate. We defined impaired fasting glucose as >100 and <126mg/dl and impaired glucose tolerance as >140 and <200mg/dl in the two hour postglucose load, as the ADA recommends.

Individuals who met the diagnostic criteria for T2D at baseline (prevalent diabetic cases) were excluded from this analysis. The population at risk was 1939 subjects.

All participants who subsequently developed T2D, regardless of time of onset, where compared with those who remained non diabetic throughout the study, with complete information. We used baseline characteristics in both groups for comparison. Individuals who had incomplete follow-up were excluded.

We identified all subjects with incomplete follow-up (586) and compared baseline characteristics, with the corresponding variables of converters and non converters.

With the established diagnostic criteria, we found 732 cases of T2D (32%). Of these, 343 (15%) were found at baseline (137 men and 206 women). This group was labeled as prevalent cases and was excluded from this analysis. During the following phases of the study, 389 (17%) participants converted from non diabetic status to T2D and were labeled as converters (164 men and 225 women). The individuals that were non diabetic at baseline and that had complete follow-up information in order to ascertain their non diabetic status throughout the entire follow-up were 964, and were labeled as non converters.

In table I, we present the results of the comparison of selected baseline variables between converters and non converters. It can be noted that individuals in the converter stage had more often a positive family history for T2D, 4 vs 1% for both parents, 4 vs 1% for both brother and/or sister. Also, converters had significantly higher maximum weight in life compared to non converters, 76 kg vs 70 kg, p<.05. Similarly, BMI, weight, waist and hip circumferences, waist/hip ratio, subscapular and tricipital skin folds, subscapular/tricipital ratio, and systolic and diastolic blood pressure were all significantly higher in converters compared to non converters.

In table II we present the results of the comparison of selected baseline metabolic variables of converters vs. non converters. It can be noted that converters had significantly higher fasting glucose and two hours post glucose load (though still in normal range) and insulin, total cholesterol and triglycerides compared to the mean values observed in non converters. As expected, HDL cholesterol was lower in converters.

The hiperinsulinemic condition of the converters is evidenced by the results of the fasting and two hours post glucose load, glucose and insulin levels. The difference in BMI among the groups should be taken into account for an appropriate interpretation of these results. 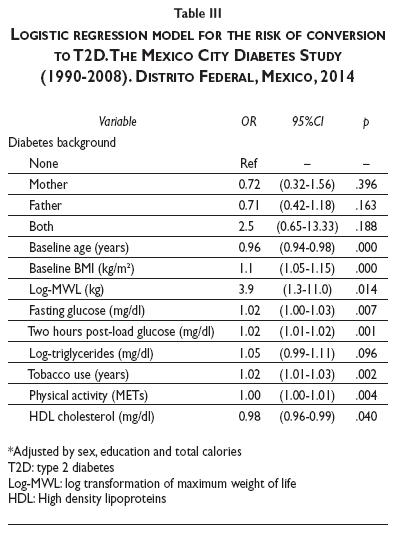 Even though there are some differences, the glucose values of the attrition group (both fasting an two hours) resemble those of the non converter group.

The stage that precedes the conversion to T2D is a phase of the natural history of T2D that is being explored intensively. Evidence shows that significant dysfunctional alterations exist before the occurrence of the disglycemic disruption, recognized as the onset of T2D. The phenotypic characteristics hereby described, that mark the differences between converters and non converters, even at the non diabetic stage (like glucose) are amenable to identification at the primary care setting. Consequently, this information can be used in preventive intervention. We pursue through this investigation to draw the attention of all involved actors, to focus in this stage of the natural history of T2D. The differences between the mean values of certain metabolic variables, although subtle (apparently normal) are of significance. This should raise the level of alertness of the system.

Results shown in table I imply that converters have indicators that could be heralding the eventual conversion to T2D, or perhaps have a "subclinical" form of the disease in the process of declaring itself with more evident manifestations. The anthropometric variables, shown to be different between the converters and the non converters, are important since they represent the magnitude and type of distribution of body adiposity, a recognized risk factor associated with the conversion to T2D. The self-reported maximal weight in life is of interest, in that converters report a maximal weight in life significantly higher than the reported by individuals remaining without conversion to T2D. This information should trigger action at much earlier phases of the disease, as it has been recommended recently.15 The vulnerability of the Mexican origin population to the deleterious consequences of obesity has been informed.16 Data from table II reveal consistent and expected findings. Fasting glucose and insulin found within "normal" range in both groups are higher in the converter group, suggesting the stage of insulin resistance, well recognized as an indicator of future T2D.

The results of the multiple logistic regression model show that recognized factors have an important contribution to the risk of conversion to T2D and are confirmed by our study.17,18 Smoking has a significant impact in the model studied. This information should be considered in the description of the phenotype of the subject at risk, especially since in our cohort a substantial proportion of participants (predominantly males) were smokers.19

The comparison of the variables of the group with incomplete follow-up (attrition group) with the converters and the non converters gives us margin to consider that bias, although occurring, is under reasonable level.

It is of practical importance to underscore the fact that more than 70% of converters emerge from normal glucose tolerance. The current paradigm tends to consider that high risk starts at impaired fasting glucose or impaired glucose tolerance, so perhaps this could imply a missed opportunity for timely preventive intervention.

The interplay between length of follow-up and selection bias as a natural result of the long follow-up should be recognized as the strength/limitation ratio. This is the only study in Mexico with these characteristics.

The conversion to T2D in Mexican population is high and could get even higher,20 reaching levels seen in the Mexican American and Pima Indian population.21,22 Since the cost associated to T2D care is already high and will increase,23,24 and the results of the current model of care are recognized as not effective,25 this ominous scenario demands a systematic translational effort in order to investigate strategies designed to apply evidence-based information in preventive endeavors. The call for innovative action is now.26

23. Arredondo A, Zuñiga A. Economic consequences of epidemiological changes in diabetes in middle-income countries. The Mexican Case. Diabetes Care 2004;27:104-109.